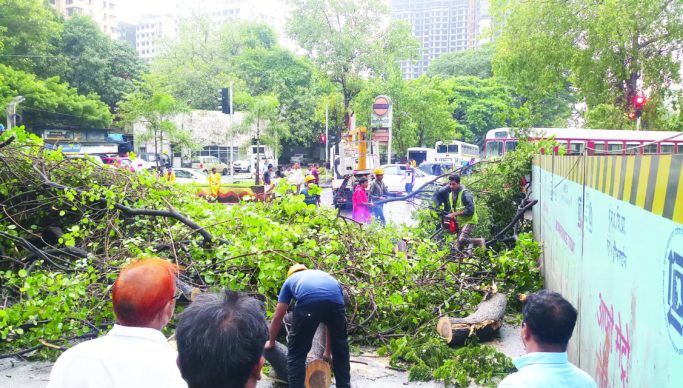 The relentless deluge brought the life of Mumbaikars once again to a grinding halt when Mumbai witnessed incessant rains from Friday to Sunday. According to the Indian Meteorological Department (IMD), Mumbai broke 60 years’ record of the highest rainfall in July and created new history! The heavy downpour made the life of Mumbaikars miserable due to Mumbai’s lifeline, the local trains and public transport, being abruptly disrupted. Traffic jams, water-logging and people marooned at railway stations and deserted places added to their woes.

The monsoon fury created havoc not only to the lives of human beings but the stormy winds proved disastrous for several trees in Mulund. According to reports, 2 trees fell on the roads in 3 days under the jurisdiction BMC T-Ward. Besides, 11 trees have been reported to be uprooted in private properties. Home Times in its investigation detected huge tree branches lying on the roads in Mulund at 6 different places and 8 tree branches were found at private properties. The tree falls in private properties damaged a few vehicles standing in the premises.

According to norms, if any tree falls or the branches are uprooted, then generally the contractor is held guilty, but BMC T-Ward officials gave a clean chit to the concerned contractors claiming the calamity was a natural disaster. An official told Home Times, “The trees and branches were devastated due to excessive rain. It was a natural calamity hence the contractors cannot be blamed for erroneous trimming.” The official added, “We can take against any contractor if a contractor does not collect the tree branches scattered on roads or dispose off the fallen trees properly.”

BMC Appeal to Mulundkars
BMC T-Ward has appealed to every private property owners/housing societies to write letters and take immediate permission for trimming dangerous trees in their premises.

Regarding the tree falls and scattered tree branches, BMC has asked property owners that BMC officials will charge an amount after observing the damage.