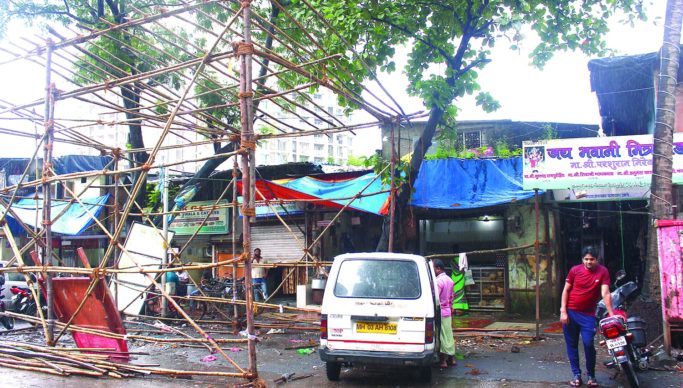 According to reports, Jai Bhawani Mitra Ganesh Mandal at Gaushala Road in Mulund (W) faced the ire of BMC for not obtaining the requisite permission for Sarvajanik Ganesh Pandal. It is reported the members of the Jai Bhawani Mitra Ganesh Mandal used all their influence and muscle power but failed to deter BMC. Finally, the Mandal was forced to perform Visarjan in three days instead of the customary 11 days.

The strict action by the BMC T-Ward has irked the members no end. Expressing rage over the severity by the BMC, a member of the Jai Bhawani Mitra Ganesh Mandal told Home Times, “Due to unavoidable circumstances, our Mandal was not able to fill the requisite online registration, but we met the police and the BMC to seek an alternative option. But, due to the court order and legal restrictions, the Mandal was compelled to conclude the Ganesh festival in three days with a heavy heart. Everybody was left disappointed by the BMC’s firm action, particularly the children were most dejected.”

It may be noted that since many Ganesh Mandal members are not much qualified, hence BMC online registration system has got a lukewarm response. Last year, it resulted in severe discontent and annoyance among several Ganpati Mandals. Thus, to tempt Ganpati Mandals, this year BMC took necessary precautions and not only made the BMC online registration system hassle-free but also became lenient in giving permissions. Nevertheless, despite BMC adopting a friendly relationship with Ganesh Mandals, a few Ganesh Mandals did not take the requisite permission in Mulund, hence BMC had to act tough!