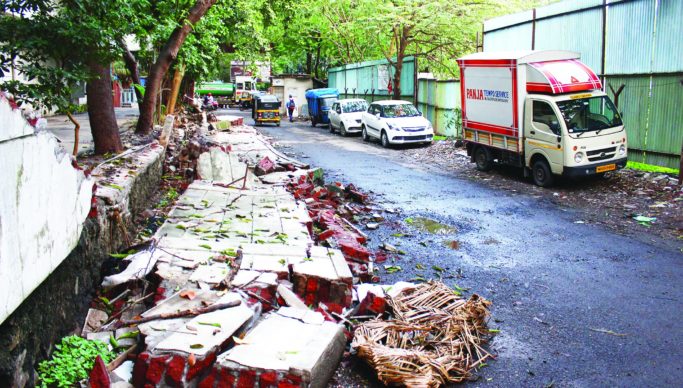 Every time BMC receives flak for doing negligent and inefficient work yet it never learns a lesson from its past mistakes. Recently, BMC T-Ward demolished the safety wall of a private company near Vishwakarma Nagar Housing Society in Mulund West but, regrettably, instead of removing the debris, the civic authorities went away leaving the debris on the road!! As a result, residents passing through the road are unnecessarily facing much inconvenience due to BMC’s negligence.

True, BMC must demolish dilapidated structures that could pose danger to the lives of citizens. Recently, BMC T-Ward demolished the old and decaying safety wall of Minerva Industrial Estate located close to the main gate of Vishwakarma Nagar Housing Society on J.N. Road in Mulund West. However, after completing the demolition, the BMC crew left the site leaving the debris scattered on the road!!

Anjika Dalvi, a resident, told Home Times, “The wall was, indeed, dangerous. People had written a complaint to BMC and, fortunately, BMC T-Ward acted fast and demolished the wall, thus giving relief to people passing by the wall. However, it is deplorable that more than 5 days have passed but still BMC employees have not collected the debris and cleaned the place. Due to this, even the Clean-Up BMC van cannot enter our housing society.” She lamented, “I fear, if BMC doe not collect this debris then in the coming days the place will become horrible and stinky.”

Balram Jaiswal, another person from the area, said, “The wall was tilting and had developed cracks, hence it posed a threat. Thus, it is praiseworthy that BMC demolished the wall, but who will remove the debris? Due to huge blocks of debris lying on the road, people are having great difficulty to walk. Motorists have a problem driving on the road.”

“The worst affected are little children going to school. They have a hard time crossing the road. Similarly, the morning and evening walks of senior citizens have been affected as they fear walking at this place. BMC must act fast and clean the debris at the earliest,” demanded Satish Patil.