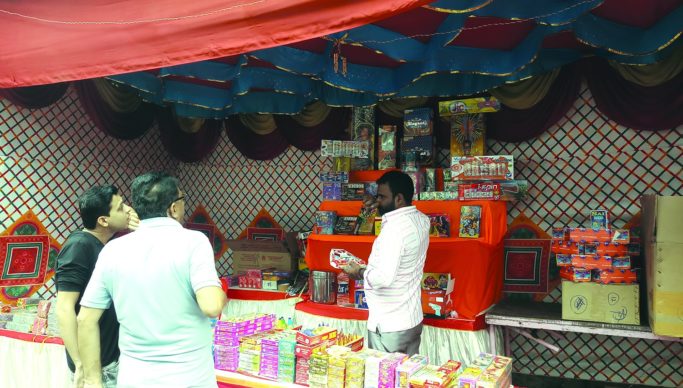 Diwali, the Festival of Lights and crackers, is round the corner. But, in Mulund, the BMC T-Ward has issued strict orders banning the sale of firecrackers in public places. BMC T-Ward Assistant Municipal Commissioner, Kishore Gandhi, told Home Times that, like last year, T-Ward plans to implement strict orders and has issued a ban on fire-crackers sold on the roadside.

Speaking to Home Times, Kishore Gandhi said, “Last year, we succeeded in controlling pollution during Diwali. Hence this year, too, we are adopting the same policy of giving no licence to anybody to sell fireworks on the roadside. Selling of fire-crackers on the road is illegal and a violation of High Court orders.”

He added, “In Mulund, we have observed that most of the fireworks are sold on the roadside by erecting temporary stalls which are dangerous from the security point of view. Hence, to deter such illegal stalls on the roads, we have not issued licences to anybody to sell fire-crackers.” “Anybody found selling fire-crackers without a licence on the road will be sternly penalized. Besides, BMC will seize all the fireworks,” he asserted.

Besides the diktat of BMC, the fire-cracker industry has been wrecked by the unseasonal monsoon. A fire-cracker businessman moaned, “The unseasonal rains in Mumbai have damaged a huge lot of fire-works. We are already reeling under the burden and now if BMC bans us from selling fire-works during Diwali, we would be ruined.”

It may be remembered that, last year, the Supreme Court in its orders had banned bursting of explosives and crackers like atom bombs, Chinese crackers, garland crackers and maroons. This year, too, these crackers have been banned. Besides, BMC has issued an advisory warning people not to burst fire-crackers near schools, colleges, courts, religious places and hospitals which have been marked as silence zones. Also, there is a ban on bursting fire-crackers between 10 pm till 6 am.

Though BMC T-Ward is strict still some miscreants have put up fire-cracker stalls! Meanwhile, some parents also insist that during Diwali it is important to burst some fire-crackers at least for the sake of little children!