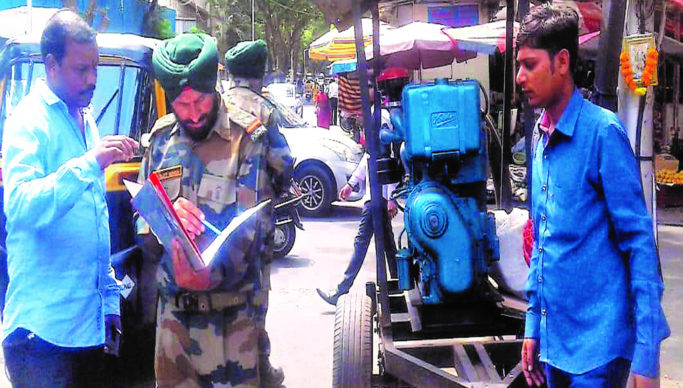 BMC –T Ward is engaged in its monsoon preparedness program with heart and soul. Nullahs and gutters are being cleaned to prevent flooding in Mulund and trees are being trimmed to avoid accidental deaths due to tree falls.

Readers may be aware that Mulund had submerged in deep water during the incessant rain in July 2005 and August 2017. The situation had worsened so much that pedestrians had to walk in knee-deep water near Mulund station. Hence, in 2018, BMC had taken extra caution yet Mulund was marred by flooding at many places. Thus, the 2018 monsoon preparedness program had exposed the poor cleaning of nullahs and gutters in Mulund.

The maximum complaints that BMC received during monsoon were related to flooding due to choking-up of nullahs and gutters. Secondly, people complained about the filth and muck overflowing from open manholes and choked gutters in their homes. Last year, BMC had used 11 ‘Dewatering Pumps’ at low lying areas to prevent flooding.  Despite service of these pumps people complained of flooding in several areas. Hence, the Disaster Management Team has informed Home Times that this time BMC would be increasing the number of ‘Dewatering Pumps’

Moreover, it claims that now it is alert and ready to tackle the monsoon. Informing about its monsoon preparedness program Amit Nigam, the Control Room Officer (CRO) of BMC T-Ward told Home Times, “Last year, we received many complaints of flooding from various areas in Mulund. Hence, this year, BMC officials visited different areas in Mulund and have identified the low -lying zones prone to flooding. To avoid flooding in such areas we would be increasing the number of ‘Dewatering Pumps’ at many more places in Mulund that witnessed flooding last year.”

True to his word, pumping machines have been installed at  Sahani Colony and Navghar Road in Mulund East, and at Vardhaman Nagar in Mulund West.”

Moreover, one extra pumping machine at each flood-prone area in Mulund has been installed to handle excessive flooding. In addition, the Indian Army jawans have also visited the flood-prone areas of Mulund to understand the place so that during an emergency they are familiar with the topography of the area.”

BMC alerts residents living in the hilly region
After floods, the other big disaster is due to the landslides. In Mulund West there are many hill-top sites like Amar Nagar, Jai Bhavani Lane (behind High Land Park), Ganesh Gullly Gorkha Chawl, Shanker Tekdi, Ganesh Pada (Mulund Colony), behind Mulund Darshan Society, Rashmi Chawl, Hanuman Pada, Rahul Nagar, Abdul Qadri Chawl Dargha, Shivaji Tekdi, etc. During the monsoon, water flows down into the houses of the people living in chawls and huts in the hilly areas.
The BMC has thus alerted the residents of these areas to stay away from the hilly zones and has urged people living here to vacate their houses during monsoon.

BMC’s appeal to citizens
The BMC, through Home Times, has made an earnest appeal to the citizens to segregate wet and dry garbage and dump these in different dustbins during monsoon. This practice will not only keep the surroundings clean, but even the gutters in your areas will be free from clogging, thus preventing flooding!
BMC T-WARD’s HELPLINE NOS.