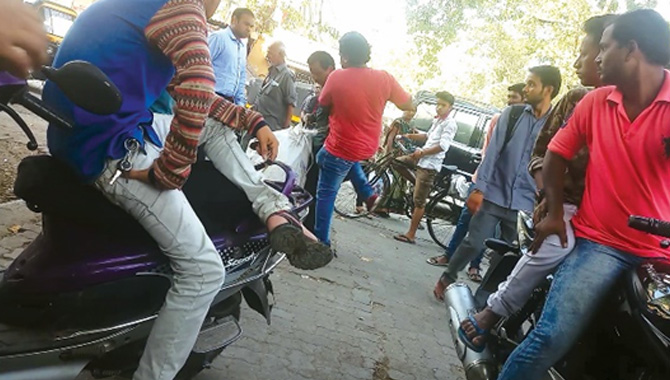 In tune with Swachh Bharat Abhiyan, BMC had appointed Clean-up Marshals to instill civic sense into Mumbaikars but, alas, it seems the noble idea has misfired. Many people across Mumbai have the complained that the Clean-up Marshals have become a menace due to their dadagiri and arrogance. In Mulund, too, people are fed-up of these Clean-up Marshals.

According to the law, the Clean-up Marshals have been appointed by BMC to stop people from littering and making the city unclean, but people complain that these marshals hide and watch people throwing litter or spitting and then they pounce upon them like a hungry lion on a poor deer! This is absolutely wrong, and BMC must take action against such incompetent and arrogant Clean-up Marshals.

An official of the Clean-Up organisation has denied that the the person who assaulted the intervenor is a Clean-Up Marshal though they will definitely look into it.

Since this incident has occurred in our very own Mulund, will Mr. Kishore Gandhi, Asst.Commr. of BMC T-Ward, take cognizance of this offence and punish the guilty? Maybe, no one has bothered to complain, but it seems the video has gone viral. Act now before Mulundkarshave to face the wrath of these unscrupulous Cean-up Marshals. Think it over, Mr.Kishore Gandhi!!!