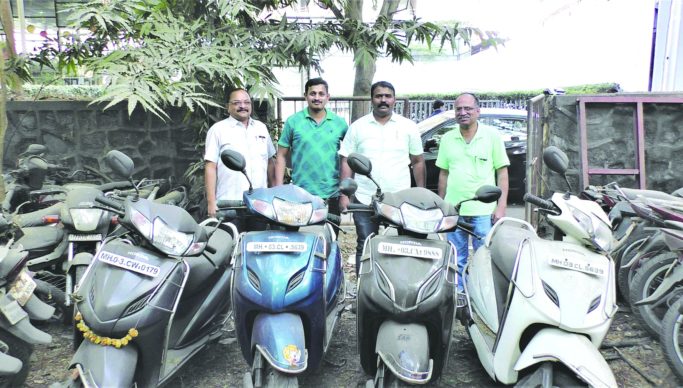 These days, online shopping has become a trend. It is easy, saves time and, sitting at home, you get your desired product. But, beware from the so-called white-collar cyber thieves who are cheating people by selling duplicate or stolen items!

Recently, Navghar Police nabbed a cyber thief who cheated people by selling two-wheelers, particularly the much-in-demand Activa, at amazingly economical rates on the OLX website. In truth, the bikes were stolen!!!

His modus operandi was that he would first steal a bike then change its number plate and make fake documents, click the picture of the bike near his house and upload the picture of the Activa on OLX for sale.  However, a small error by the accused foiled his crime and Navghar police nabbed him.

Informing about the accused, Navghar Police told Home Times, “The name of the accused is Manish Anil Naik (21). He is a resident of Navghar in Mulund East. We got a complaint, hence we tried to trace the accused. First, we tried to reach him by acting as a fake customer but, perhaps, the clever thief sensed our game, hence our plan failed.” He added, “Nevertheless, we continued our investigation. While taking a close look at the picture uploaded on the OLX website, we observed a car parked near the Activa bike. We noted the car number and contacted its owner, who turned out to be Manish Anil Naik himself. During interrogation, Manish confessed his crime and admitted that he has sold 4 bikes till date.”

The police are interrogating him and investigating his past records and checking if he had sold more bikes. The case has been brilliantly solved by the Navghar Police team consisting of Vijay Mahagaonkar (Constable), Vinayak Aambe (PI), police personnel Bharat Suryavanshi, Ajay Pilani, Pandurang Sawant and others.