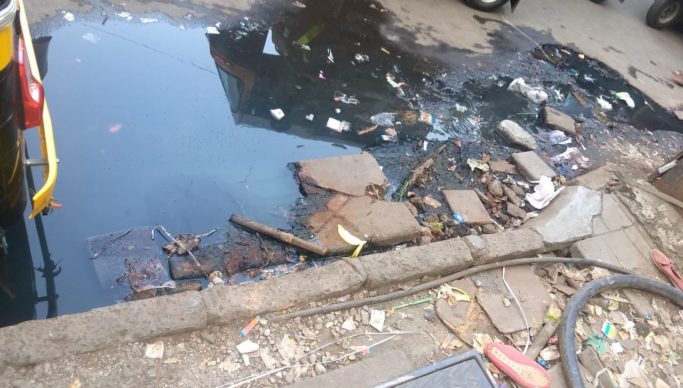 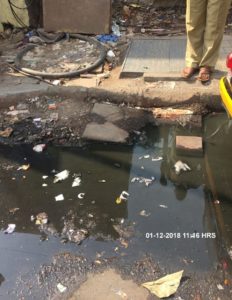 In our last issue, Home Times had informed that BMC is actively involved in cleaning drains, nullahs and gutters all around Mulund. However, Mulundkars lament that the drains around Mulund that are overflowing with muck and need urgent cleaning are being ignored by BMC T-Ward! One such drainage that has become an eyesore for Mulundkars and is emanating stink and foul smell is near the famous IDBI Bank on N.S. Road close to Mulund West railway station. 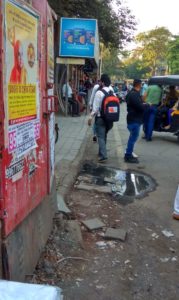 Aggravated with the filth and foul smell, a shopkeeper near IDBI Bank told Home Times, “The drainage near IDBI Bank is overflowing in the last 6 months and the dirty water and muck are overflowing on the road causing great inconvenience to the pedestrians and shopkeepers in the vicinity. The foul smell is unbearable and the sight of the dirty muck on the road is awful.”

He added, “What is most dangerous is that near the drainage is an electric box (DP) whose naked wire is dangling out on the footpath. If the electric wire comes in contact with water, then it could create havoc as the place is frequented by several people. Since the place is at a stone’s throw from Mulund railway station, hence the disaster can be huge. Therefore, the drainage must be cleaned on a war footing and the eclectic wire placed back into the electric DP box.” 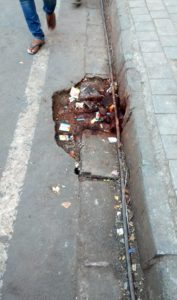 Pramod Yadav, a cloth vendor selling clothes on the streets, informed, “Due to the drainage water overflowing on the road, it creates a major problem for me and other cloth vendors who sell clothes on the street. Hence, frustrated with the problem I personally gave a written complaint to BMC T-Ward. I also took the signature and stamp of the officers of IDBI Bank who, too, are facing the ordeal since the past 6 months.”  He moaned, “Despite six months of submitting the complaint, the BMC T-Ward officials have not taken our complaint seriously. Every day our clothes get stained with dirty water. We suffer losses. Our business is badly marred, but BMC is least bothered about the problems of the common man”.

Since the drainage is close to the railway station, many people stand in long queues for hiring sharing long distance auto rickshaw and undergo the suffering of filth and foul smell.

Another Mulundkar told Home Times, “The people of the area had made a complaint at Diwali time. Besides complaining at T-Ward, people also wrote to the BMC Head office at CST but, tragically, it’s been almost two months, yet the BMC is still in a state slumber!”
Home Times urges the concerned BMC officials to act fast before it is too late because the drainage issue has become a threat to the citizens. First, due to the dirt and filth, many diseases like Malaria and Dengue can spread in the area. Secondly, the open wire from Electric box DP is a major hazard. BMC T-Ward must act fast!!!