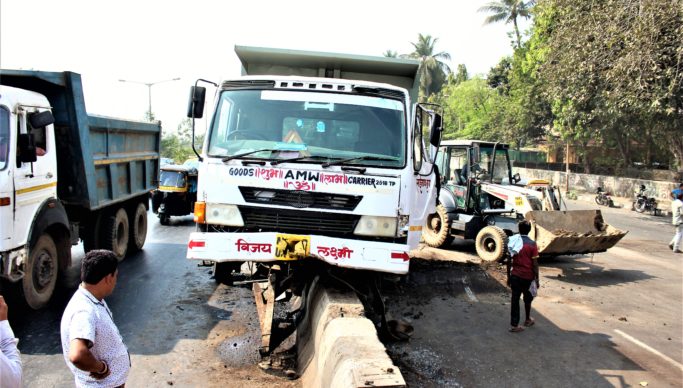 The Eastern Express Highway (EEH) has won the dubious title of being the ‘Highway of Accidents’! Many accidents are being reported on the highway, particularly at the safety boundary walls on both the sides of the flyover at Navghar and Bhandup pumping area have become utterly dangerous and cause many accidents.

In order to reduce the problem of traffic jam at LBS Marg, the Maharashtra Government constructed the Yashwantrao Chavan Eastern Express Highway. The EEH has proved beneficial for Mumbaikars, but this highway is very dangerous at many places. As a result, there are umpteen accidents reported here. According to reports, in a single month the EEH has witnessed some 3-4 heavy vehicles being badly damaged due to accidents.

Motorists complain that at night the safety boundary walls made on both sides of the flyover are not visible. As a result, speeding vehicles bang against them and pay a heavy price. Such accidents have been mostly reported either at night or in the wee hours of the day. The reason is that the roads, at these times, are empty hence the drivers drive at jet speed. However, the space dividing the road and the flyover has a layer of 2-3 feet concrete which creates hurdles. At a fast speed the vehicle hits the divider and this causes the vehicle to turn upside down! This not only causes heavy damage to it,but also injures the driver.

In the past 2 months, many accidents have been reported near the Navghar flyover. Mostly vehicles driving towards Thane have turned turtle. Two months back an oil tanker had turned upside down at this same place. All the oil from the tanker had spilled on the road and the traffic was badly hit. A few days later, a BMC Clean–Up van had also overturned in the early morning. On Wednesday, a similar accident had occurred.

Despite so many accidents being reported at the same place, the Traffic Police have not put up a sign alerting driver to drive slowly. The other drawback of such accidents is that the vehicles are not cleared from the spot immediately. Hence, this causes great inconvenience to motorists. People have demanded to put Blinkers and Clashers at the crucial spots of accidents so that the drivers take care while driving.

When Home Times contacted RTO Chief of Mulund, PundalikKaygude, he confessed that there is a rise in accidents at the mentioned spot at Navghar. When Home Times urged the traffic Chief to take concrete action and stop these accidents, Mr. Pundalik assured to erect Blinkers and Clashers at the crucial spots of accidents as soon as possible.