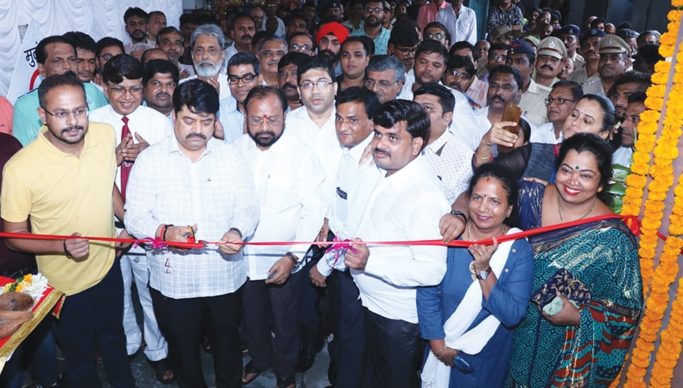 The long-pending Foot Over Bridge (FOB) connecting Mulund West and Mulund East at Mulund Railway Station was eventually inaugurated on Saturday, June 29, 2019, after much delay. The FOB was inaugurated at the hands of Member of Parliament, Manoj Kotak. Delighted at the opening of the new FOB, a Mulundkar said, “The opening of the FOB is a big relief to Mulundkars because the other two FOBs connecting Mulund West and East in Mulund are in a dilapidated state.”

On the occasion, Manoj Kotak applauded ex-MP Kirit Somaiya for doing great work for the face-lift of Central Railway during his tenure as MP of Mumbai North East constituency. Manoj Kotak, in his address said, “The credit for the construction of the new FOB rightly goes for Kirit Somaiya. It is due to his hard work that today new FOBs and escalators are being installed in Mumbai.”

It may be noted, like Mulund’s new FOB, the Railways is dismantling dilapidated FOBs and constructing new FOBs all over Mumbai and Thane. It is a step taken to avoid any untoward tragedy like the ill-fated stampede in 2017 that killed 22 people at Elphinstone Road station. After that accident, the Himalaya Bridge collapsed at CST in which 7 innocent Mumbaikars lost their lives! In addition, a bridge at Andheri, too, collapsed.

The collapse of these bridges saw the railway administration in a tight spot. They received flak from the media and Mumbaikars. Finally, the railway administration awoke from its slumber and started auditing FOBs in Mumbai as a precautionary measure to prevent accidents. At the same time, Railway officials gave a green signal to construct a new FOB in Mulund after observing the pathetic condition of the two FOBs in Mulund.

The new FOB in Mulund has been constructed by Mumbai Railway Vikas Corporation Ltd (MRVC Ltd). The highlight of the new FOB is that it starts from the parking space in Mulund West and connect platforms number 1, 2, 3 and 4 and exits at Mulund East. Secondly, unlike the old bridges, the new bridge is much wider and spacious. Besides a new FOB, Mulundkars will soon get a new escalator and an elevator (lift) connecting the new bridge. However, Mulundkars will have to wait for some time for the inauguration of the escalator and elevator.