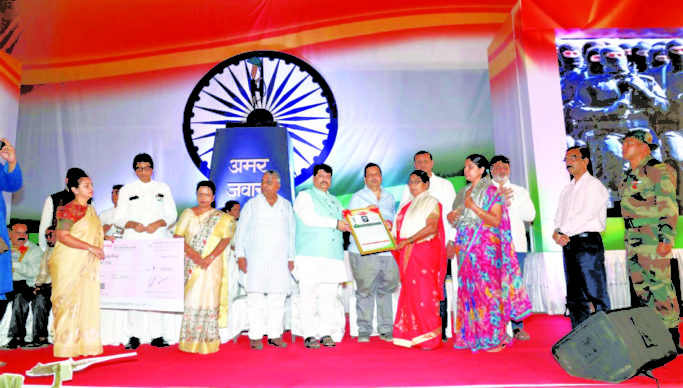 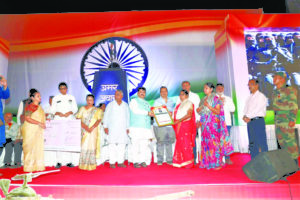 Each year, on national festivals, the country echoes with the Lata Mangeshkar patriotic song, Aye Mere Vatan Ke Logo. Since years this song is being played, but how many of us have truly been moved by the message of the song? How many of us have ever decided to contribute a little to the welfare of the martyred soldiers’ families? How many of us have thought about how the families of these martyr soldiers survive? The hardships they face??
Well, the truth is that out of a colossal population of 130 crores only a handful of people have truly cared for the martyred soldiers’ families! One amongst the few is Manoj Kotak (M.P.), who has initiated an annual event Shahid Parivar Gaurav Samaroh, where he not only salutes the Martyred jawans’ families in public, but also helps them finically by donating Rs 1 lakh. On January 25, 2020, the 4th Annual Shahid Parivar Gaurav Samaroh 2020 was held at Kalidas ground at P.K. road in Mulund West.
The Kalidas ground entrance was beautifully decorated on the lines of the Amar Jawan model and famous poets from across the country like Shashikant Yadav (Shashi), Rambabu Sikarwar, Kamal Agney and Ram Bhadawar made the atmosphere patriotic with their desh bhakti poems. The program was witnessed by a massive crowd.
Amidst patriotic poems and echoes of ”Bharat Mata Ki Jai’ and ‘Vande Mataram’,   MP Manoj Kotak felicitated the families of the Indian Army’s brave-heart soldiers who sacrificed their lives for Mother India. The martyrs remembered were Lance Naik Sandeep Raghunath Sawant,  Commando Suresh Jalindar Pisaal;  Havildar Jotiba Ganpati Chougule, and  Naib Subedar Sunil Raosaheb Valte. The families were honoured by presenting them the traditional shawl, a coconut, a memento and financial aid of Rs 1 lakh!
While receiving the honour, Mangala Sunil Valte touched the hearts of the gathering. In her brief yet poignant speech, she said, “For the welfare of the nation, the soldiers of our country sacrifice their present, but the nation forgets them after their sacrifice!”
Speaking on the occasion, Manoj Kotak said, “The main aim of organizing the event is to portray that the families who have sacrificed their sons for the country are not alone, but the entire country stands along with the martyrs’ families!”
To make the event memorable, the organizers had left no stone unturned. They had made a variety of attractions like a spectacular model of India Gate at the main entrance of Kalidas, the salutation by the NCC Band, a striking model of Bharat Mata, mannequins with detail information about several martyrs who sacrificed their lives for the freedom of India, etc. The major highlight was a gigantic Rangoli admeasuring 60′ x 30′ giving detailed information about the multiple regiments and battalions of the Indian armed forces!
The event was attended by top politicians, ex-army men, various top government officials, Presidents of several Trusts/Mandals, NGOs, principals and teachers of school and colleges and others.
The event was a huge success thanks to the efforts of Ketan Kotak, Director of Mulund Yuvak Prerna and its members.