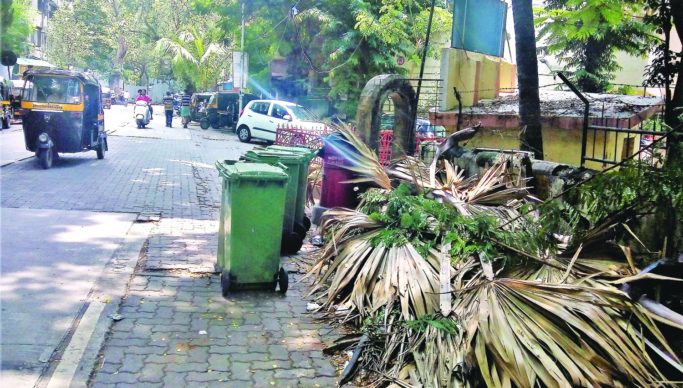 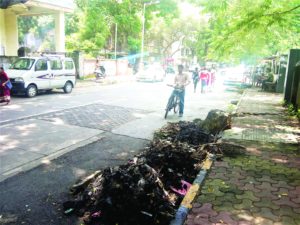 Heaps of garbage and filth abound in Mulund (E) as far as the eyes can see. More prominent spots telling the tale of such callous attitude of BMC are Nanepada Bridge, Khandoba Mandir, J.P.M. Society as also the surrounding area like Sant Ramdas, etc. Garbage has been piling up near Nanepada Bridge. Added to this, the residents here use this spot as an open garbage bin. What’s more, one can find empty liquor bottles strewn everywhere. According to the locals, the heaps of garbage have become a breeding ground of mosquitoes. An eyewitness resident, Vedant Mhatre informed Home Times complaints have been lodged with BMC T-Ward only to fall on deaf ears. No one seems to come here to clear the mounds of garbage. Though daily, one Clean-up van makes the rounds, the workers remove a small quantity of garbage and move on. Moreover, the proliferation of anti-social activities and goons have made it very unsafe for senior citizens and the women-folk to venture out of their homes after dark.

A similar scenario can be witnessed near Khandoba Mandir where the filth removed from the nullah and heaped on the road has been left uncleared. Pollution is in the air owing to this lackadaisical attitude of BMC T-Ward. Passers-by here have to cope up with untold misery in this place. Benches for senior citizens have been placed a short distance away, but one just cannot occupy them owing to the stench from the filth. A local resident, Abhinav, claims that one week has lapsed but the administration has not taken any notice of this problem. This is an open invitation to health issues.

Another instance of T-Ward’s utter disregard for Mulundkars is the haphazard removal of waste by BMC workers. A case in point is the garbage bin located opposite J.P.M. Society where only that garbage is removed that is in the bin, but not outside it. This garbage is left lying on the road, caring two hoots for the public. The watchman here avers that garbage and debris have been lying here un-noticed by the authorities since the past five days. The Clean-up van removes the garbage twice daily but does not touch the garbage lying outside the bin. Any answers BMC T-Ward??