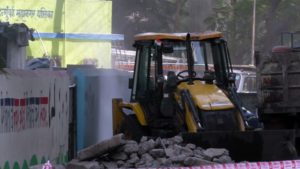 Already the prices of LPG (Liquefied Petroleum Gas) are sky-rocketing. The rates of LPG gas cylinders have crossed all limits and the people who are using Piped Natural Gas (PNG) too are experiencing the pinch with the ever-increasing monthly bills. Amidst such a scenario when there is a huge deficiency of LPG fuel in the country, in Mulund, LPG is callously being wasted by the civic officials!! A picture of the civic officials’ negligence can be gauged from the fact that in a single week, Mulund has witnessed two instances of Mahanagar Gas pipelines being damaged due to negligent digging work by BMC workers!
Last week, Home Times reported about the damage to a Mahanagar Gas pipeline at Bhakti Marg in Mulund West. No sooner the damage was repaired, another Mahanagar Gas Pipeline opposite M.T. Agrawal Hospital in Mulund West was damaged by BMC employees!! Before the damage was repaired, a massive amount of LPG was wasted. It not only caused breathing ailments and suffocation to residents living in the vicinity, but it created panic among the residents. Thankfully, the fire brigade officials reached the spot and mended the gas pipeline in time.
A panic-ridden resident said, “It took almost 45 minutes to repair the gas pipeline. It is a long time as LPG spreads quickly and could have caused a major calamity had the gas come into contact with fire. Fortunately, nothing happened but the people living in the area were terrified and faced breathing and other health hazards.”
An eye witness present on the time of accident informed, “For digging, a crane was being used  on the road opposite M.T. Agrawal Hospital. The accident happened due to the crane operator’s negligence. Instead of taking precaution and watchfully digging, he was in haste. As a result, the crane rammed the Mahanagar Gas pipeline and it got ruptured.”
According to the Mahanagar Gas officials, the two accidents of gas pipelines being damaged in a week might affect the supply at both CNG stations in Mulund and domestic Piped Natural Gas (PNG). Mulundkars are thus anxious and worried that Mahanagar does not disrupt the gas supply!