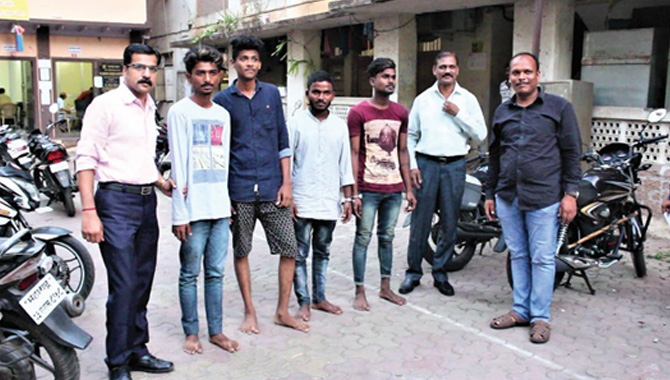 The four notorious criminals who had committed robbery at Ishchhaya building located at Gavanipada in Mulund (W) have spilled the beans. During strict interrogation, the thieves revealed about the other robberies they had conducted in the recent past. Besides recovering 40 gms gold, the police have also recovered many things from the four accused.

Readers may be aware that a senior citizen lady, Olive Michael Godino, had lodged a police complaint about a robbery at her house at Ishchhaya building in Gavanipada in Mulund (W). The four thieves had looted gold jewellery worth Rs 75,000/- and cash worth Rs 5000/- and had escaped. The police had caught the accused Prahlad Chandrakant Machalu alias Yeka, Manish Rohitdas Jadhav, Dheeraj Sairam Dutta, Muzammil Salim Mulani alias Muzzu with the help of CCTV footage.
During sustained interrogation, the criminals confessed to committing four more robberies in the recent past.  The police recovered 40 gms gold from them valued at Rs 1.30 lacs. In addition, the police have also recovered 2 mobile phones, a silver anklet and cash worth Rs 25,000/-.
The entire investigation was held under the guidance of Mulund West Sr.PI Shripad Kale and PI Kasar.