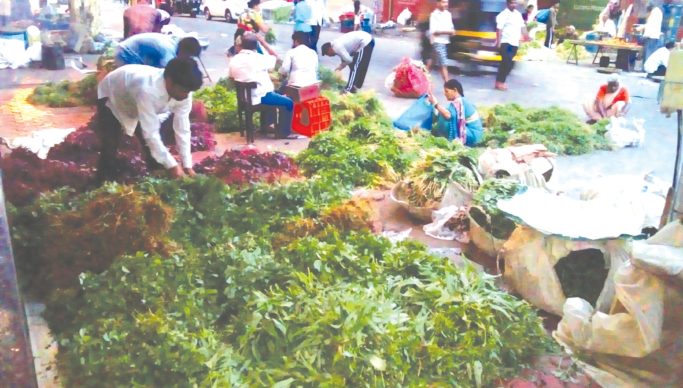 To take a reality check behind the quality of the so-called ‘fresh’ vegetables, Home Times team reached Mulund railway station at dawn, when trucks loaded with vegetables arrive in Mulund. On reaching the station, our team witnessed an awful sight of the vegetables being unloaded and kept on the dirt-filled road!! Obviously, the road is polluted with innumerable germs and micro-organisms! Many animals pee on the road and tyres of vehicles that ply on the road also contain shit and all sorts of dirt. Thus, keeping vegetables on the bare road is surely hazardous to human health!!! But, the clever vegetable vendors display these same (dirty) vegetables attractively at their stalls and deceive the innocent buyers!!!

In addition, the quality of some vegetables unloaded is so wretched and the vegetables so rotten that the vendors leave such vegetables on the road and take the rest of the vegetables for sale. The left-over vegetables then come under the feet of the pedestrians or are dumped in a corner of the road.

Who is the culprit behind the waste heap at Mulund rickshaw stand?
It has been observed that the maximum amount of waste accumulated at the Mulund rickshaw stand is generated by the disposal of decayed vegetables dumped by vegetable truck drivers in the morning. However, despite Home Times and NGOs making a hue and cry over this waste, BMC never takes the issue seriously.

However, Rita Jain, a Mulund resident who commutes daily to catch the 6.30 a.m. local from Mulund station, had a different opinion of the vegetables. She told Home Times, “When I come to Mulund station in the morning, the sight of vegetables scattered on the road is disgusting. After watching these vegetables in such a terrible condition, I wonder, how can these polluted vegetables be healthy, particularly the green leafy vegetables?”

Akshay Gala, a regular morning walker, told Home Times, “Besides the pollution and traffic jam, the vendors and the consumers create a lot of ‘sound pollution’ as there are huge brawls and bargaining. This disturbs the peace of the people living in the vicinity.” He added, “As the vegetables are supposed to come from the farms, hence they are unclean with mud and other micro-organisms glued to them. Hence, consumers must be cautious before using such ‘impure’ vegetables.”

Thus, the issue is not that these vegetables pollute Mulund station premises, but the vegetables sold by vendors are unclean! Secondly, in the evening the same vegetables are sold to buyers by deceiving them!  Thus, isn’t it the duty of the civic department to check that the residents are given fresh and quality vegetables???  Mulundkars, Beware! Don’t rush for economical vegetables. Better take care of your health, too!!!