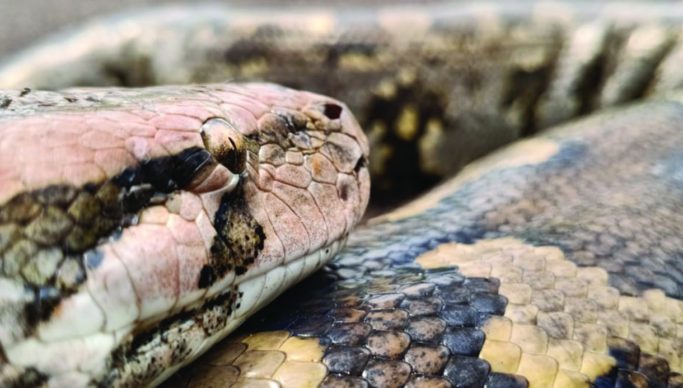 The incessant rains in Mumbai have not only made life hell for Mumbaikars but even the animals are in a dilemma. Home Times, in its issues, has been consistently highlighting how innocent animals have been displaced from their natural habitat, but thanks are due to animal lover NGOs like RAWW (Resqink Association for Wildlife Welfare) which have played a key role and rescued a few fortunate animals.

This week, the team of RAWW rescued an 8-foot long python which had been displaced from the jungles and trapped in the human locality.

According to reports, on Saturday, September 14, 2019, a python was sighted on a road moving at Swapna Nagari in Mulund West.

The snake was crawling to a construction site close to the slum area. Pawan Sharma, President of RAWW and Member of Forest Department, told Home Times, “It seems, due to heavy rain, the snake was displaced from the jungles and lost its way to its habitat.”

Sharma added, “Tracing a python as long as 8 feet is nothing startling. Earlier, in April, we had rescued a deadly 1.5-foot long cobra from the kitchen in a house. A venomous Russell’s viper was accidentally trapped in the rat trap in a Mall. This monsoon, we have rescued many reptiles and birds.”

Similarly, on Tuesday, September 17, a venomous 4-foot long Russell’s viper was rescued from LBS Marg. Some women were cutting the grass when they sighted the snake and called animal friends Hasmukh Valanju and Saurav Shinde. The snake was later released in its natural habitat.

From April to August, the RAWW Team rescued 318 reptiles, 175 birds and 38 mammals. Overall, 524 animals have been saved.