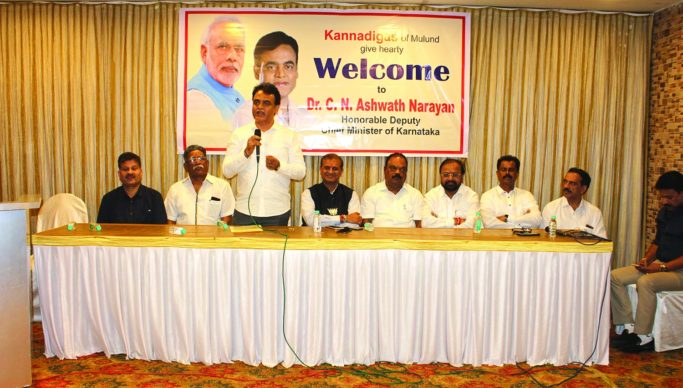 With just two days to go for the Assembly Election, candidates have escalated their campaigning in a last ditch attempt to woo the voters. Leaders and workers of all political parties are sparing no efforts to project their respective candidates to ensure their victory. To this end, Karnataka’s Deputy Chief Minister, Dr C. N. Ashwath Narayan has come down to Mulund to campaign for the BJP candidate, Mihir Kotecha. Mihir Kotecha has joined the election fray from Mulund for the Mulund Assembly seat. Dr Ashwath Narayan had come down specially to offer support and campaign for BJP nominee, Mihir Kotecha. Ignoring larger constituencies, Dr Narayan actively participated in Kotecha’s rally, urging the electorate to ensure a resounding victory for his BJP counterpart.

He said, ” I have come on behalf of my party, the BJP, to seek your vote for Mihir Kotecha. He is a responsible person and an astute businessman. He has shown great prowess and has worked well in different spheres of activity.” “There is no doubt whatsoever that he will emerge victoriously,” gushed Dr Narayan.

Praising Mihir Kotecha, he expressed confidence that the BJP candidate and the party workers will serve Mulundkars well and Mihir Kotecha will win the election with a comfortable margin. Mulund’s public is with the BJP, he proclaimed. Along with Mulund, the BJP has done really good work also in Karnataka and in the country. That’s why, keeping in mind the tremendous work done by the Bharatiya Janata Party, the electorate will give another opportunity to us to serve the people of Mulund, confided Dr. Ashwath Anand to Home Times.