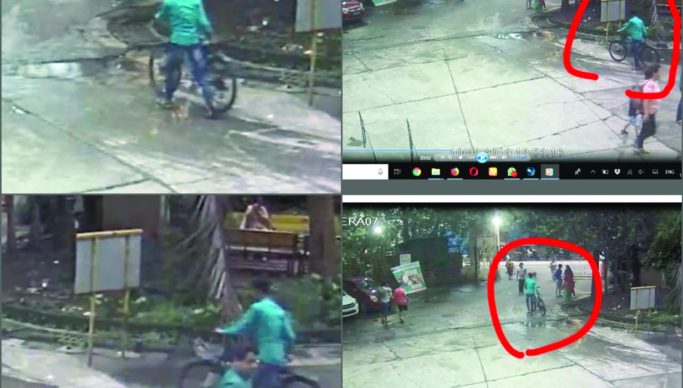 Cycle theft may seem to be a minor crime, but in Mulund’s Lok Everest Society the crime has taken a gigantic shape. The residents are in a state of panic as many as 10 high-speed gear expensive cycles (ranging between Rs 15, 000 to Rs 30,000/-) have been stolen from the Society. Fortunately, Mulund police have succeeded in identifying the accused who has been caught on the society CCTV Camera.

Initially, the residents did not take the theft of cycles seriously. But residents’ say that since the past one year there have been regular complaints of cycle thefts. Generally, the cycles stolen were high-tech costly cycles. A few days back the thieves stole a brand new cycle of resident Chetan Thakker from the parking lot in the Society. Thakker lodged a police complaint. During their investigation, the police checked the CCTV camera and detected a stranger suspiciously moving around the cycle. Later, the stranger effortlessly dragged the locked cycle and escaped right under the nose of the security guards! Surprisingly, the security guards raised no alarm!!

Though the police have noticed a stranger in CCTV stealing the cycle, but still they have not been able to nab the accused. When Home Times spoke to people in the Society, many told that in the past year there has been a huge spurt in cycle thefts. Sameer Patil said, “In the past year more than 10 very expensive cycles have been stolen. Today, cycles are being robbed, residents fear tomorrow little children playing in open can also become the target. People are thus panic-stricken.”

Another resident, Harilal Kotak, said, “Two and half years back, my cycle worth Rs 25,000/- was stolen but I did not raise an alarm, but now with the rise in cycle thefts I am concerned.” He added, “It seems the accused is well-versed about the Society premises, hence has been escaping the eyes of the law. But he could prove to be dangerous, hence it is essential to nab the culprit urgently.”