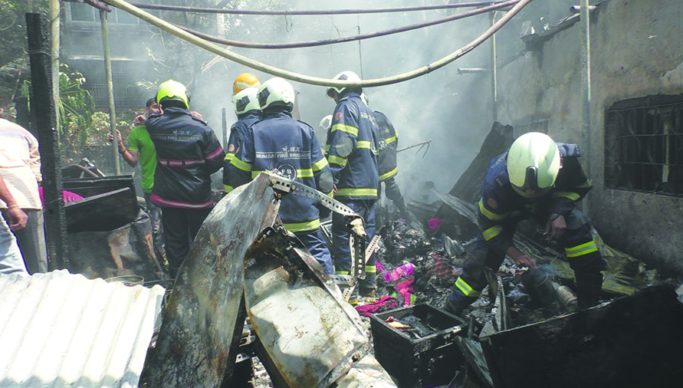 According to reports, at least 7 huts were gutted in the massive fire which broke out in Bhimabai Chawl in Navghar’s Gully no. 1. The cause of the fire is yet to be ascertained. However, the explosion of 2 gas cylinders is suspected to be the prime reason behind the blaze. The fire brigade rushed 5 fire engines to the spot. The injured were admitted to Veer Savarkar Hospital in Mulund East.

An eye witnessed told Home Times that before the fire brigade could reach the spot, the blazing flames of the house that caught fire, began spreading to the adjacent 7 houses and gutted them! The blazing inferno caused intense chaos as panic-stricken residents began to run helter-skelter to save their lives. In the melee, many people have trapped in the deadly inferno and fire brigade officials had a hard time to rescue them. The fire was so severe that it took almost three hours to bring the fire under control.

In the accident, some ladies were injured and were rushed to Veer Savarkar Hospital in Mulund East. According to doctors at the hospital, the ladies are safe and recuperating fast.