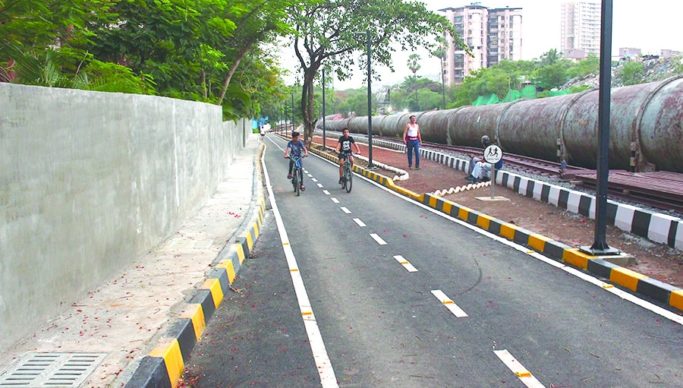 Mulundkars received a rude shock when the new Municipal Commissioner, Pravin Pardeshi, paid a surprise visit to inspect the first phase work of the cycle track in Mulund. In an attempt to impress the BMC Chief, the BMC T-Ward made a momentary beautification at the cycle track by installing flowers pots to elevate the beauty of the area. But, soon after the BMC chief’s exit, BMC took away the flower pots. When Mulundkars protested, a haughty BMC employee bragged, “Yeh sirf sahib ko dikhane ke liye tha, sahib gaye to yeh bhi jata hai! (“This was just meant to a show sahib (Municipal Commissioner). Sahib has gone so are the flowers being despatched back!”

According to reports on Tuesday, June 18, 2019, the new Municipal Commissioner, Pravin Pardeshi, visited Mulund to examine the much-publicized cycle track along the Tansa water pipeline. Baffled at the unexpected visit, the BMC Hydraulic Engineers were left in a fix. Thus, they began preparations at the last minute. Nevertheless, before Pravin Pardeshi arrived the BMC Hydraulic Engineers ran helter-skelter and brought colourful flowers and beautified the cycle track zone to impress their chief and win laurels.

As expected, Pravin Pardeshi paid a visit in the evening along with Assistant Commissioner and BMC Hydraulic Engineers. However, no sooner did the Municipal Commissioner and the high profile delegation left the site, the BMC staff started loading the flowers pots back onto a truck!! Stunned at the hypocritical approach of the BMC staff, the people walking on the track questioned, but the arrogant BMC staff bluntly replied, “The beautification and splendour was displayed to impress sahib (BMC Commissioner). Sahib has gone so the flowers are being despatched from where they were brought!”

The callous reply by the BMC staff left the people disappointed. Agonized by the uncivilized brag of the BMC employee, a lady resident told Home Times “Frankly speaking, BMC has done a good job. The cycle track is, indeed, good. The beautification done by adding flower pots elevated the splendour. We felt happy and excited for a moment, but we had a rude shock when the moment the civic chief departed, BMC removed the flowers and packed them off.”

She added, “If the display was just a momentary display to impress the civic chief, then it is extremely unethical to deceive your superiors by such fake display and false pretence! Secondly, the rude address of BMC staff with Mumbaikar is highly deplorable!”

Speaking about the cycle track, both Mumbaikars and Mulundkars are desperately waiting for its completion. In the first phase, work is ready between Vasant Oscar and Goregaon Mulund Link Road.