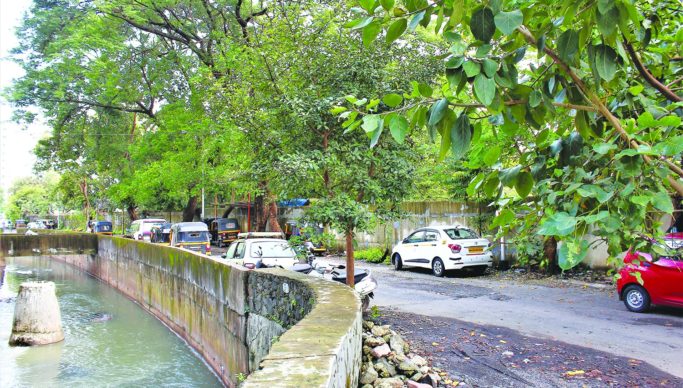 Mulund: Once called the ‘Prince of Suburb’ Mulund is fast losing its glitter thanks to the diminishing ‘Greenery’ in the name of so-called development!! Tragically the onslaught on the ‘Green Belt’ in Mulund continues with BMC T-Ward announcing a further axing of 550 trees in Mulund!

A BMC T-Ward Garden department informed Home Times, “The decision to cut trees has been taken by the Solid Waste Management Department (SWMD) of the BMC after taking into consideration the development of Mulund.” He added, “Approximately 550 trees across Mulund have been chalked out to be axed. Though the number is still not final but an estimate 276 Tress will be cut from Sonapur Signal to Check-Naka on LBS Marg in Mulund West for Metro Work. Besides, 171 Trees will be chopped for the construction of the upcoming M.T. Agarwal Hospital in Mulund West. Similarly, 94 Trees at Nanepada in Mulund East will be slashed for constructing a Box Drainage system. Also, 6 Trees at Neriwala nullah and 3 Trees at R.P. Road in Mulund West would be cut for the widening of the nullah.”

In protest against the killing of trees famous Environmentalists Zoru Bhathena has raised an alarm! Expressing his anger against BMC wanton killing of trees in the name of development, Zoru Bhathena said, “The government must stop the insanity of chopping trees. Last year, in 2018, there was a demand to cut 8755 trees. Shockingly, this year, in just 8 months, the same figure has escalated to 9000 trees!! It is illogical to cut trees for widening nullah because scientifically it is a proven fact that trees are the best form of the natural drainage system.”

Calling Mumbaikars to wake up and fight for the protection of the Green Belt, which are the Green Lungs of Mumbai, he said, “It is high time the citizens of Mumbai protest and force the civil administration to stop felling of trees. Until Mumbaikars unite and wage a war against the on-going onslaught on the greenery in Mumbai, trees will continue to be killed in the hunger for growth and development.”

True. Home Times supports environmentalists. The unplanned urbanization and wanton killing of trees are signals of a dangerous calamity, the repercussions of which would be disastrous! The recent floods in Indian state like Maharashtra, Kerala, Gujarat, etc are a glimpse of nature’s fury. Home Times thus condemns the BMC decision and urges the civic administrations’ to seek alternative measures. Home Times calls the people of Mulund to stand up for their green lungs and wage a war to Stop Cutting of Tress!

The trees that have fallen in BMC’s jurisdiction are a result of poor trimming and negligence by BMC contractors. In one tree-fall accident, a poor rickshaw driver lost life while the passenger had a narrow escape but was severely injured. When Home Times confronted the BMC T-Ward Garden Department to know the reason behind tree falls in Mulund, an official said, “BMC does not have any mechanism or a magical gadget that informs us about the weakening of the roots. Thus, we are deceived by the exterior look of trees. Many times we have observed that trees that look green and strong collapse because we are not aware of their weak roots. Hence  we neglect them and they result in collapse.” He added, “Secondly, as the trees grow older, their  branches also expand but due to lack of space even healthy trees turn grey and fall.”

Besides deforestation and trees becoming the victim of the government’s development projects, many trees in Mulund have been uprooted due to natural calamities. This year, with the onset of monsoon, many trees in Mulund were uprooted due to the monsoon fury. According to the data from the Garden Department of BMC T-Ward, in 2019, 42 trees have been destroyed. Out of these 37 trees were on private land and 5 trees in BMC’s jurisdiction.