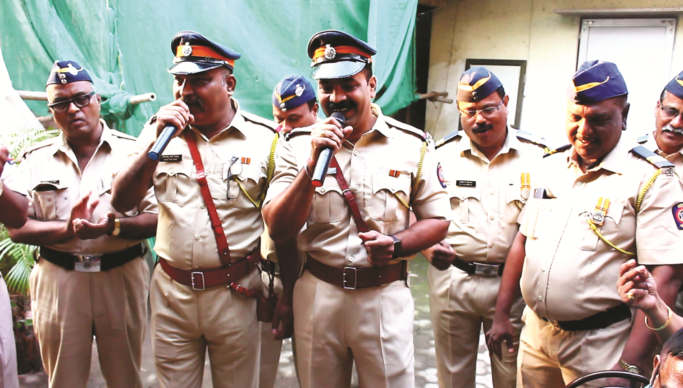 The 71st Republic Day was celebrated with patriotic fervour in Mulund and across the country. While the Indian Tricolour was unfurled at  government offices, schools and colleges, the patriotic zeal and zest witnessed at Mulund Police Station was an event par excellence.

The policemen at Mulund Police Station proved that they are not just men of ‘steel’ to protect the city, but also have a heart that bleeds for Mother India. Thus, unlike other Republic Day celebrations where the atmosphere was made electric by patriotic songs played on the loudspeakers,  Mulund Policemen celebrated Republic Day by organizing a stage show where the entire staff of Mulund Police (both male and female police officers) entertained the gathering, singing heart-rendering desh bhakti songs!
The audience seated in was left awestruck at the versatility of the Mulund Police. Every policeman or lady police officer who sung the songs took the audience by their feet. The ambience turned so patriotic that even the audience joined the policemen on stage to sing songs. In a nutshell, the scene at Mulund Police Station was seen to be believed!  Mulund Police Station thundered with echoes of thunderous applause and appreciation by Mulundkars!!

To make the celebration memorable, the entire Mulund Police Station was decorated like a bride. It dazzled with attractive colourful lights. To enhance the beauty of the Republic Day celebration grandeur Rangoli at the entrance of Mulund Police station welcomed the guests!
Addressing Mulundkars, the Mulund Police Station Senior PI Ravi Sardesai said, “During each festival the nation enjoys the festivities while the police are busy in maintaining bandobast to prevent nothing disturbs the celebrations. However, during every national festival, along with police even the citizens participate. Thus, during national festivals we get the opportunity to be part of the celebrations.” He added, “Besides, we also wish to enlighten the citizens that even in the Police Department we have many potential artistes who are at par with any other artiste to entertain the citizens.”