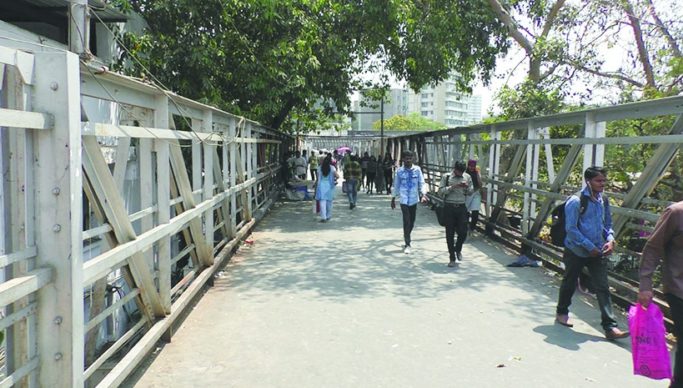 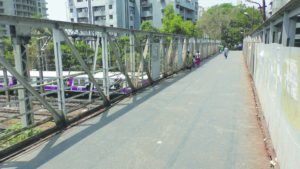 After receiving flak over the Himalaya Foot Over Bridge (FOB) collapse last week, BMC and the Railways have begun inspecting and issuing Re-audits of the various dangerous FOBs in Mumbai. Under one such inspection carried out in Mulund, the Railways engineers have found all the 3 FOBs to be ‘dangerous’! Hence, they have proposed to demolish them and construct new FOBs!

In Mulund, there are three FOBs. The first FOB is near Apna Bazaar and the other 2 FOBs are in the premises of Mulund Railway station. One FOB is near the famous Roxy Book Depot while the second is towards the Thane direction inside Mulund station. Shockingly, all the three FOBs have been declared ‘dangerous’ by the railway officials who examined these FOBs.

It may be noted, just a few months back, the FOB inside Mulund Railway station towards the Thane direction was revamped. After renovation, the authorities had assured the bridge would survive for another two years, but after the recent inspection the railway officials have declared it dangerous and plan to dismantle it and erect a new FOB.

According to a railway engineer, during the recent inspection all the three FOBs of Mulund were detected to be ‘dangerous’ and would be dismantled and re-constructed. The Railways administration has announced that since all the 3 FOBs of Mulund are in a dismal state and are over 40 years old, hence a decision has been taken to demolish all 3 FOBs and build new FOBs for the safety of the citizens.

It may be remembered that, a few months back, a portion of the FOB made near the railway ticket window had collapsed on platform number 4.  Fortunately, nobody was on the platform nor a local train was passing underneath it, hence major calamity was averted. Despite the accident, no action was taken by the administration. Secondly, due to a cold war between the Railways and BMC, the renovation work of the FOB was delayed.

But now, a new ray of hope is seen at the end of the tunnel as the railway engineers have given a green signal to demolish all the three FOBs and construct new FOBs!!! Home Times believes this is a sincere promise and not just a fake promise to win votes with the Lok Sabha Elections around the corner!!!