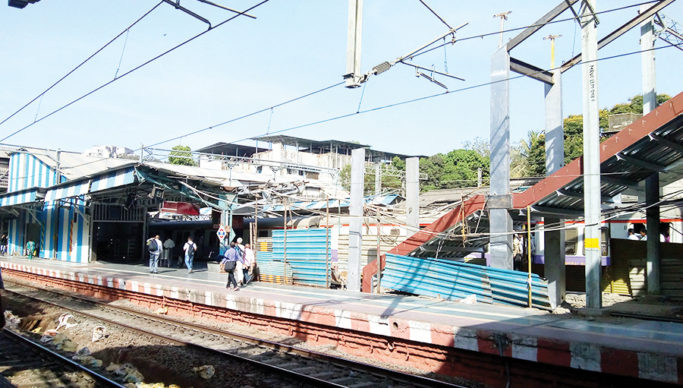 Mulund railway station is getting a new face-lift. From the construction of a new FOB to escalators to new toilets and expansion, Mulund railway station is witnessing a number of activities. As a result, the roof AT PLATFORMS 2 AND 3 of the railway station has been removed. Tragically, no protection from the scorching sun has created chaos as commuters are fuming and demanding to erect a temporary shade at the earliest! Besides the removal of the shade, the renovation work of the toilet is also posing many problems to the commuters.

Sharad Shinde, a Mulund resident annoyed at the inconvenience to the commuters at Mulund station, told Home Times, “Already, Mumbai is facing intense heat. Amidst such blazing heat, the absence of the roof at Mulund station’s platforms 2 and 3 has added to the woes of the commuters. The local trains are also delayed, hence waiting in the sweltering heat is quite troublesome. It leads to excessive sweating and the sweat even drenches our clothes and all day we have to move about in sweat-drenched clothes! Hence, I urge the Mulund railway authorities to quickly put a shade over platform numbers 2 and 3 and save the commuters from the acute heat stroke.”

Vinay Lad, another commuter, said, “After 9 a.m., the scorching sunrays start pricking our body. What is most taxing is to stand on the platform without a shade. The heat is so exhausting that some people cannot withstand the heat and fall down due to dizziness. Hence, it is dangerous to the health of the commuters. Thus, I appeal to the railway authorities to hasten the expansion work and try to complete as early as possible so that poor commuters are saved the agony of the sun’s rays.”  “We would be obliged if the authorities could make some temporary arrangements of a shade while the work is in progress,” he pleaded.

While appreciating the facelift work of the railway authority, Avadhoot More told Home Times, “It is laudable that the railways is making a new FoB, but while carrying such work the government officials must also take into account the difficulties faced by the commuters. Standing under the blazing sun rays at 30 degrees Celsius is injurious to health. Hence, I hope the railway authorities would soon put up a shed for the relief of the commuters.”

Reshma Joshi, a lady commuter lambasting the hawkers and vendors within the railway premises, said, “Already it is an arduous task to enter Mulund station premises due to the throng of illegal hawkers and vendors surrounding a major portion of the station premises. However, after much struggling, we reach the station and, on reaching the station, we are again confronted with the heavy oncoming rush and, on top of it, standing in the heat without a shade is most frustrating. I hope the railways provides a shade at the earliest!”

Home Times hopes the railway authorities would pay heed to the agony of the commuters and look for some alternate arrangements to save the railway commuters from the heat.