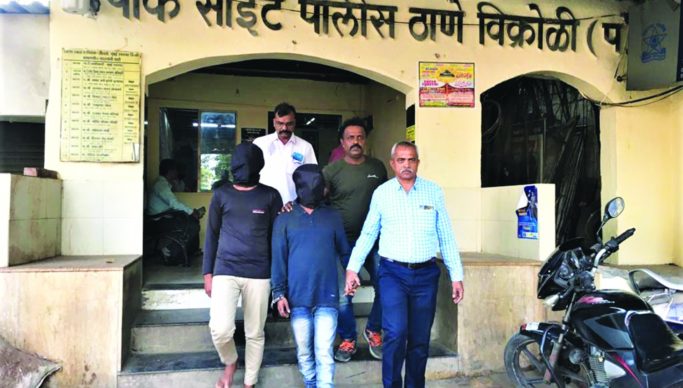 Kudos to the Parksite Police who foiled a robbery attempt of two notorious thieves who tried to loot the famous Gulati Petrol Pump located on LBS Marg in Vikhroli. The police nabbed the accused red-handed!! DCP Akhilesh Singh has applauded the Parksite Police for catching the big fish as the duo were history-sheeters and wanted in many crimes. The duo is also infamous for committing thefts at malls in Mulund and Bhandup.

The police arrested the duo, Nihal Harpal Singh alias King (28) and Abdul Rehman Shaikh (22). According to sources, the incident happened on Friday late evening, December 13, 2019. The Vikhroli Police were patrolling when they saw two notorious criminals threatening the employees of the Gulati Petrol Pump. One of the criminals pointed a revolver while the other brandished a sharp knife. When the police pounced upon them, the duo dodged the police and sped away towards Powai on a motorbike. However, the police chased them and, in hot pursuit, nabbed them.

When the police brought them to the police station they recovered a toy gun, a sharp knife, debit/credit cards registered on other people’s names, a mobile phone and a self-defence spray. Also, a pair of hand gloves, two scarves and a motorcycle were seized from them.
During interrogation, the duo confessed they had planned to loot the Gulati Petrol Pump.  The duo also confessed their other crimes. They told they indulged in firing at an Andheri petrol pump, committed robbery at Vikhroli Parksite, robbed at gunpoint in Thane. Besides, also committed robberies in Mulund, Bhandup, Shivaji Nagar, etc.

The police have booked them under IPC sections 398, 504 and 34 respectively. The court remanded the culprits to police custody.