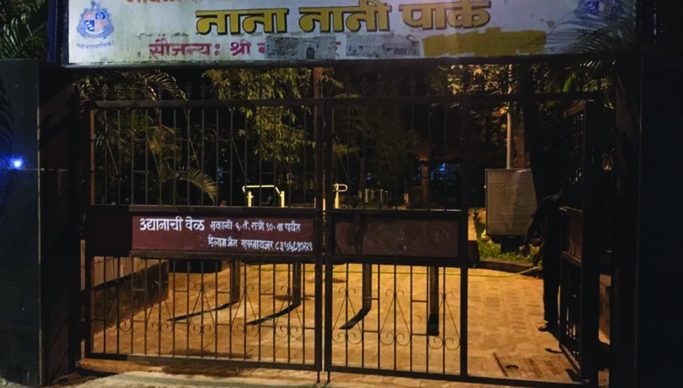 The Nana Nani Park, as the name suggests, was made by the civic body in Mulund East for the leisure of senior citizens. The garden, earlier known as Mavala Sambhaji Kondhalkar Garden, was renovated by the BMC T-Ward a few years back and given a new lease of life. The civic body had put new benches and coloured the surrounding walls to liven up the mood of citizens visiting the park.

After the renovation, the park became a favourite place of senior citizens as a secure relaxation outlet to enjoy the greenery and fresh air. It had many facilities including a laughter club, a chatting hub for senior citizens and much more. However, since the past many months the park lights have been non-functional. Due to darkness, senior citizens have stopped visiting the garden. The park, in turn, has become a favourite adda of anti-social elements and lovebirds.

Annoyed at the civic body’s failure to fix the park lights, a senior citizen said, “The park lights have been non-functional for the past many months but the civic body is not paying any attention to fix them. As a result, the garden has been hijacked by hooligans who drink alcohol and consume drugs.” “Besides, it is embarrassing to watch young couples shamelessly romancing behind bushes and trees. Hence, many senior citizens have quit visiting the park,” he lamented.

Another senior citizen from the locality said, “When the park was renovated, it was a paradise for senior citizens. But, ever since the lights have gone off the garden, it has become a den of notorious people and romantic couples. The question is: Is the park for the Nana Nanis (senior citizens) or hooligans and lovers?”

When Home Times took the senior citizens’ woes to BMC T-Ward’s Garden Department, Mr Bhoye, the officer-in-charge said, “The lights in the park are maintained by the Maharashtra State Electricity Distribution Company Limited (MSEDCL). Since we have been informed about the issue we would soon alert MSEDCL and get the lights functional at the earliest.”