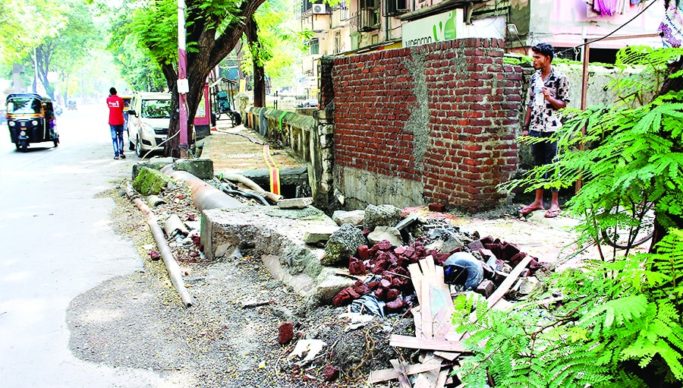 Footpaths are the basic necessity for pedestrians but, alas, in the recent past few years the plight of footpaths has deteriorated so drastically that, forget walking over them, it is appalling to even watch the dismal state of footpaths in Mumbai. 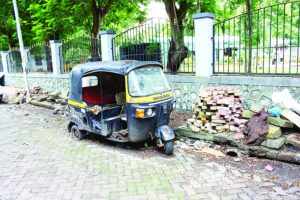 Home Times recently captured the pathetic plight of the footpath outside Dr. Chintamani Deshmukh Garden in Mulund East and was left stunned at the reckless use of the hard-earned tax money of Mumbaikars!! The height of BMC’s governance can be gauged from the fact that the footpath was built just 8 months back and is today lying in shambles!!! Ironically, despite the citizens’ agony, BMC T-Ward has turned a Nelson’s Eye to the footpath!!

According to reports, the footpath outside Dr. Chintamani Deshmukh Garden was constructed in November 2018. Locals informed that the work of the footpath was started before the implementation of the Model Code of Conduct (MCC). However, after the implementation of MCC, the work came to a halt. Shockingly, it’s been 8 months since then the paver blocks, stones and other materials required to construct the footpath are lying abandoned at the site. The half-dug footpath is posing a problem to citizens but BMC is least bothered!

Citizens have written several complaints to BMC, but in vain. Rakesh Thakker, a resident told Home Times, “Dr. Chintamani Deshmukh Garden is thronged by a large number of people. Usually, children and senior citizens visit the garden but, looking at the pathetic condition of the footpath, people keep away from walking over it.”  He added, “We have made protests and even submitted a written complaint to BMC T-Ward. But, BMC is giving us a deaf ear.”

Condemning the BMC for its corruption and loot, Thakker sarcastically said, “It seems construction of footpaths these days has become an easy means to mint money. In the guise of development, BMC is spending cores of rupees, tragically, the benefit of which is nothing for the common man. It is nothing but looting the common man of Mumbai.”

When Home Times confronted BMC T-Ward, the BMC officials expressed ignorance about the digging work at the footpath near Dr. Chintamani Deshmukh Garden. On insistence, BMC assured to solve the issue at the earliest but, alas, no action has been taken and the plight of the footpath remains as usual.

Home Times discovers many footpaths in pathetic condition
It is not just the question of the footpath outside Dr. Chintamani Deshmukh garden in Mulund East. Home Times in its investigation has discovered the poor plight of several footpaths at many places in Mulund. 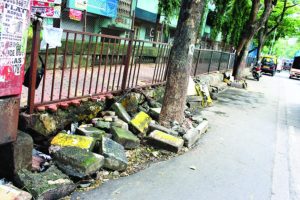 1) The cover stone at the junction of R.R.T. Road and P.K. Road in Mulund west has been removed but BMC is ignorant. 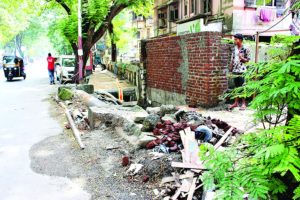 2) New footpaths were made at Vardhaman Nagar a few months ago. The paver blocks have begun uprooting, causing difficulty in walking. 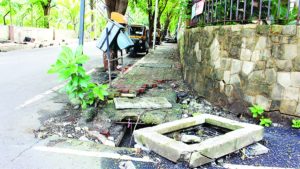 3) The plight of the footpath on Deshbandhu Chittaranjan Das Marg, near Sharon High School in Mulund is pathetic. The paver blocks have been removed and kept by the side of the road, but still the civic body is blind-folded.