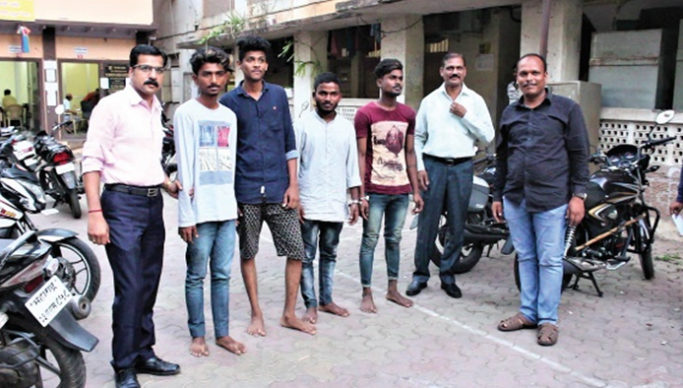 Mulund Police station Sr.PI Shripad Kale and the police team under his supervision are on their toes to foil attempts of thieves on the prowl to loot homes of people on vacation. In a recent arrest, the Navghar police arrested four notorious Mumbai criminals who looted a house in Gavanipada in Mulund(W).

According to reports, the four criminals had looted Rs 80,000/- from Ishchhaya Building located at Gavanipada in Mulund (W). The resident, a senior citizen lady by the name of Olive Michael Godinho, had locked her house and went out on April 30, 2018. The thieves found the house in darkness.They climbed the water pipe and entered the house by breaking the bathroom window. They stole gold jewellery worth Rs 75,000/- and cash Rs 5000/- and escaped. Later, the thieves silently came down the same pipe and robbed another house in the opposite building. There, they stole three mobiles and silver jewellery.
When Olive returned home, she was stunned to find her house burgled.She immediately lodged a police complaint. The police swung into action and visited her building. They checked the CCTV footage and found the criminals Prahlad Chandrakant Machalu alias Yeka, Manish Rohitdas Jadhav, Dheeraj Sairam Dutta and Muzammil Salim Mulani alias Muzzu loitering around the building.
According to the police, both Prahlad and Manish Rohitdas are residents of Indira Nagar in Mulund, while Muzammil and Dheeraj reside at Khindi Pada in Bhandup (West) and all are notorious criminals. The police nabbed the three -Prahlad, Manish, and Dheeraj on May 1, while Muzammil was picked up from his house on Wednesday (May 2).  During interrogation, the thieves confessed to the crime.  Sr.PISripad Kale of Mulund Police station told Home Times, “I am happy that our police officers did a commendable job and nabbed the four criminals within a short time. However, I must confess that the police could nab the culprits easily due to the help of CCTV cameras installed in the housing society.”
He added, “Due to summer vacation the thieves take advantage, of closed houses, hence people should be alert. Do not keep jewellery and huge cash in your house. Even if you go on vacation, inform your neighbours. I appeal to the residents to be vigilant and urge all housing societies to install CCTV cameras.”

The case is being investigated by PSI Krishna Khot of Mulund Police station.