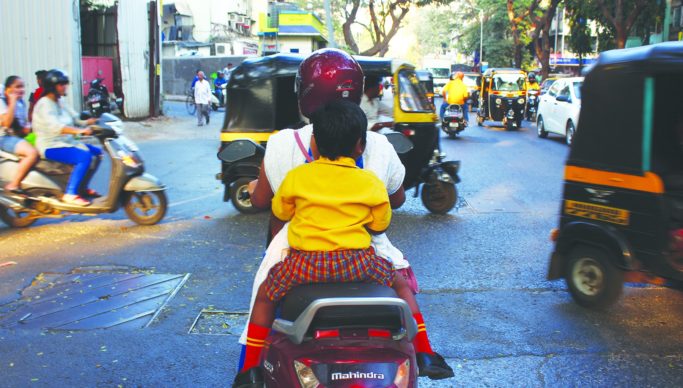 Do you drop and pick your child from school on a bike? If yes, then buy a mini-helmet for your child soon as the state government has made the helmets mandatory for children pillion riding to school! In case, a parent is found violating the law then his licence will be seized and he shall face a fine!

Helmets play a key role during accidents. In fact, according to a study, 4 out of 10 motorcyclists have been saved in lethal accidents on the national highways just because of their helmets. Secondly, in Maharashtra, 33% of pillion riders on the bike are killed due to the absence of a helmet. Besides, recently a 14-year-old child, not wearing a helmet, was killed in a road rage incident in Mumbai.  Hence, the RTO is tightening the screws on riders not wearing helmets. Taking a step further, the Regional Transport Office (RTO) has decided to make helmets mandatory for all school students pillion riding on a bike with their parents to school.

According to an RTO official, the Maharashtra Transport Department has issued a circular to all schools asking them to warn parents who drop their children to schools on bikes to ensure that the child wears a helmet while pillion riding. If a child is found without a helmet then the RTO may take action against the parents!

It may be noted the Bombay High Court has slammed the Education Department for ignoring the safety of school students. The HC highlighted the 2018 report which stated that children between the ages of 5-14 have been killed mostly due to road accidents. HC maintained since the skull of children is not as tough as adults, they are more vulnerable to head injuries. Hence, a helmet is a ‘must’ for all children above 4 years.

Interestingly, while the HC decision is laudable but the problem is that mini helmets for children are not available in the market. There are a handful of shops that have helmets but the supply is less as compared to the demand. Besides, the government has still not prescribed any grading or a size essential for children. Experts feel the helmets for children must be attractive with bright colours and pictures of cartoons that appeal to them to wear.