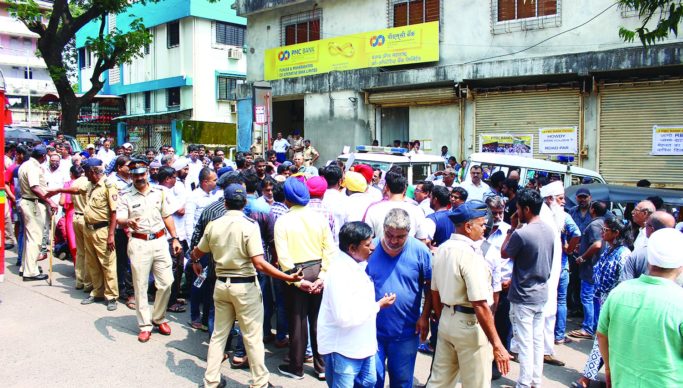 Several agitated depositors of Punjab and Maharashtra Cooperative (PMC) Bank staged protests at different places demanding recovery of their money or else threatened to boycott the upcoming Assembly Election. In Mulund, hundreds of account-holders gathered outside the PMC Bank branch at Mulund Colony and raised slogans against PMC Bank and the Reserve Bank of India (RBI). These angry account-holders carried placards screaming, “No Recovery; No Vote!”

On Wednesday, October 2, 2019, when the nation was busy celebrating Gandhi Jayanti, tragically, lacs of helpless PMC Bank account holders staged dharnas and protests across the country condemning the large- scale corruption in the banking sector and demanding justice. A gloomy picture of PMC account holders protesting outside the PMC Bank branch at Mulund Colony was heart-rending, to say the least.  To add insult to injury, Mulund police arrested a few over-agitated people but later released them.

Mulund Colony has a huge population of 2.5 lac residents. A major portion of the population is Sindhis and Sikhs. And, most people have deposited their hard-earned money in the PMC Bank for decades. Many have deposited their life savings in the Bank. Thus, with RBI putting a restriction on withdrawals from PMC Bank, several hundred residents in Mulund Colony are in a fix! The situation has turned so pitiable that many people are not even able to pay the school fees of their children while some sick people are not visiting doctors as they have no money to pay doctors’ fees! In short, the RBI decision has sent shock-waves among thousands of PMC Bank depositors across India.

The citizens are angry with the political leaders because, despite the savings of the innocent people stuck and people in crisis, none of the political leaders has come in the open to fight against the Bank and give justice to the people. Hence, people are fuming and have decided to boycott the upcoming Assembly Polls. According to reports, annoyed Mumbaikars from Mulund, Bhandup, Vikhroli and a few residential complexes in the western suburbs of Jogeshwari have launched a campaign ‘No Money, No Vote’!

PMC Bank Depositor’s Decry
I have just retired and deposited my entire savings of post-retirement in PMC Bank, Mulund Colony Branch. It is my hard-earned white money. I am wondering, “Why has my white money been put under lock and key? In 2018, RBI had detected irregularities in the operation of PMC Bank. If RBI was aware of the irregularities of PMC Bank, then why it didn’t alert the account-holders?? I think the only solution to bring out the co-operative banks from the fiscal mess is to merge them with strong banks as the government is doing to save the drowning nationalised banks in India.”
– Minal Patil

It is annoying that the RBI is not even informing the people about the PMC Bank irregularities. Even if the RBI starts issuing press releases informing details about the PMC swindle then it could satisfy the account- holders. But, alas, the RBI’s eerie silence is irritating. Since RBI is not declaring anything concrete about the culprits of the PMC scam, hence people are forced to come on the roads and staged dharnas and protests. The RBI is not acting against the banks that give crores of loans to top business tycoons and diamond merchants, who incidentally, after taking the loan escape and never return the money!! The government urges to invest in ‘Make In India’ projects but where are the funds??”
– Balchandra Khanna

Due to the threat of demonetisation, everybody deposited their money in the banks but, alas, the banks took mean advantage and issued huge loans to companies that have gone bankrupt! Regrettably, even the PMC bank has been conning the account-holders by opening several dummy accounts to replace the stressed accounts held by the Wadhawan-led HDIL. The bank officials violated banking norms and showed false profits to mislead the authorities, although the bank was incurring losses. It is a fraud case with political connections. The police should seize the passport and seal all the properties and bank accounts of the Managing Director of PMC Bank and parade him on the road! – Balwinder Singh