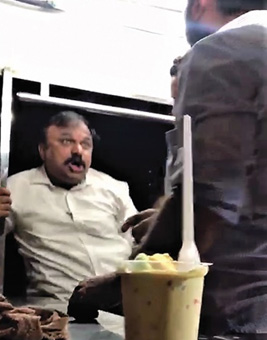 Bhandup: The ‘Dadagiri’ of Mumbai police is not a secret. The trend of policemen lifting vegetables, fruits, and other eatables without paying money is a common sight in Mumbai. An ice-cream vendor in Bhandup, perhaps, was unaware of this trend. Hence, he dared to ask a policeman to pay money for the ice-cream the cop bought. However, instead of paying money, the policeman got furious as if the vendor’s request for money was unlawful. Agitated, the policeman started assaulting the ice-cream vendor black and blue.
As usual, the people watched the atrocity of the policeman in silence.However, a Good Samaritan captured the police brutality on his mobile and made it public on social media. Since then, the horrifying video has gone viral and is making waves.

The video raises questions on the ‘Dadagiri’ of police brutality and demands immediate action against such high-handed policemen. Tragically, however, till now no action has been taken against the said policeman.
It may be noted that a few days back Vijay Gosavi, a traffic constable, bought an ice-cream from an ice-cream vendor in Bhandup. After eating the ice-cream, Gosavi moved on but the ice-cream vendor asked him to pay money for the ice-cream. This angered Gosavi and he abused him for demanding money from him. But, when the ice-cream vendor insisted, Gosavi lost his temper and started assaulting him. Gosavi assaulted the vendor so badly that he was severely injured and had to be hospitalised.
When Home Times took up the issue with RTO Chief, Prakash Mansukh, he said, “The accused traffic constable Vijay Gosavi is employed at the Police Recruitment Cell. We have received a complaint about his misconduct. After police inquiry, we will take appropriate action against him.”
A resident who witnessed the terrible assault, told Home Times, “According to the Police Manual, whether it is a traffic policeman or the local police, they have no power to manhandle.” He wondered, “How long shall we be harassed by the dadagiri of the police and government officials? Isn’t there any law to stop this atrocity and brutality of the government servants in power?