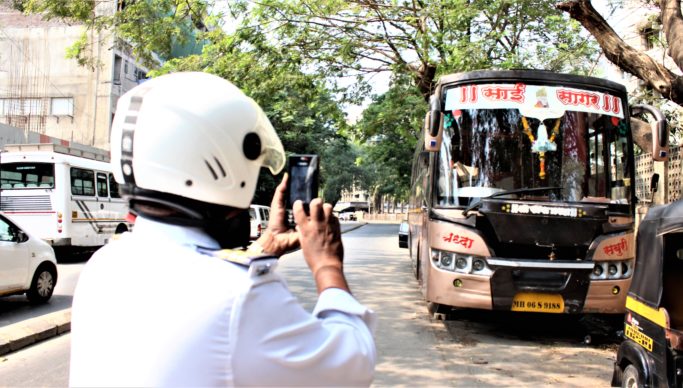 To charge fine of Rs 200 per day and warns of seizing the vehicles!!

The Mumbai Traffic Police Department had issued a ban on parking of heavy vehiclesin the streets of Mumbai. According to the notification, all heavy vehicles were asked not to park their vehicles on roadside/ streets from February 1, 2018. The reason cited was the problem of growing traffic snarls. The ban came into effect from February 1.

As per the notification, all heavy vehicles were asked to park at their privately owned or rented spaces or in authorizedPayand-Park spaces. Despite the RTO ban, none of the drivers in Mulund obeyed this law. As a result, dumpers, trucks, tempos were seen parked at roadside/ streets as usual in Mulund, thereby making a mockery of the RTO laws.

In Mulund, one can spot heavily vehicles parked on the roads at LBS Marg, P & T Colony, St Pius Road, PK Road and Campus Hotel in Mulund East. Due to this, other small vehicles and pedestrians face great inconvenience to drive and walk on the roads. With the implementation of the RTO rule prohibiting parking of heavy vehicles on the street and roadside, the Mulund Police began action and, in 15 days,penalisedmore than 50 heavy vehicles parked like this.

In Mulund, one can see mostly heavy vehicles parked on roads that are near schools and colleges.As a result, in the morning most of the school vans and school buses face traffic jam problems. Sometimes, vehicles are parked in narrow lanes which makes it difficult to notice a vehicle coming from the opposite direction.

One can witness this condition at St Pius Road and LBS Marg. Due to this, auto drivers and two-wheelerridershave to pay a heavy price. In case ofan accident, if a school bus becomes involved,then who should be responsible for injury to the school children??? Besides, the drivers of parked private buses, dumpers, trucks, tempos, etc. just park their vehicles and do not remove their vehicles for 2-3 days!!!

As per the February 1 notice, all heavy vehicles and private buses are restricted to enter and ply on roads in Mumbai from 7 am. In addition, a similar ban has been imposed on all heavy vehicles from parking on roads and streets of Mumbai. RTO has made it clear that all heavy vehicles will have to either park their vehicles in their own private zones or park at rental parkings (Pay and Park) in the city.

Despite such order in Mulund, the RTO rule is being mocked as more than half the roads are packed with vehicles parked on the roadside.

However, Mulund RTO Sr.PI Prakash Manshukh told Home Times, “We are taking stringent action against every owner who is not following RTO norms and who has parked his heavy vehicle on the roadside or streets. We are going to charge Rs 200/- per day (fine). This charge will keep multiplying by the number of days a vehicle has been wrongfully parked. In addition, their vehicle will also be seized.”