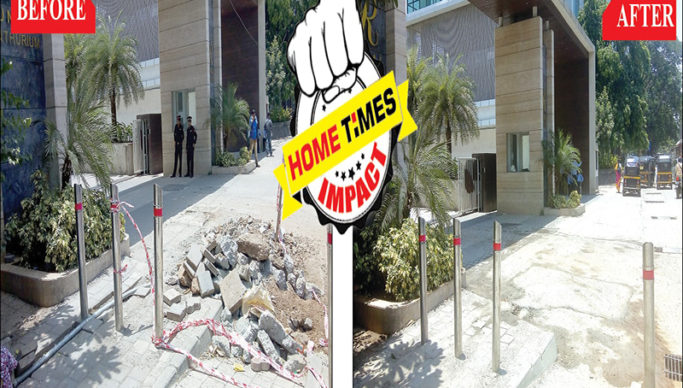 Residents of Runwal Anthurium in Mulund West have thanked Home Times as the BMC Water Department officials have finally picked the material that they had left behind at the gate of the building after doing the water pipeline work in the building. This had caused severe problems for the residents living in the building.

Elated at the quick response by Home Times, Chowkidar Surendra Singh, a resident of Runwal Anthurium expressed thanks. Singh informed, “Initially, the residents had made several requests to BMC to pick the material left behind, but in vain. Hence, frustrated with BMC’s poor response, the residents approached Home Times to seek a solution to their problem. I am glad that Home Times took up the issue with the Water Department and soon the officials from the department took away the leftover material.”

Condemning the negligence of the BMC officials, Singh said, “The BMC officials are known for doing half-hearted work.” He added, “The BMC officials had excellently carried out the water pipeline mending work but, alas, after completing the work the officials did not pick their material and left the dug up road as it is. This posed an obstacle to motorists and residents living in the building. Many times the residents had to pick the stones from the road themselves, causing immense hardship. However, I am obliged to Home Times that after they highlighted our woes in the newspaper, BMC woke up from their slumber and took immediate action.”

Street Name Board Cleared Of Obstruction

LID BACK ON GUTTER

Mulund Station Gets A Shed, At Last!!

Debris Being Dumped Under The Ploy Of Developing A Garden!

AT LAST!! FREEDOM FROM TRAFFIC JAMS!!!

Bhandup’s Dangerous FOB Shut for Public; To be demolished soon!