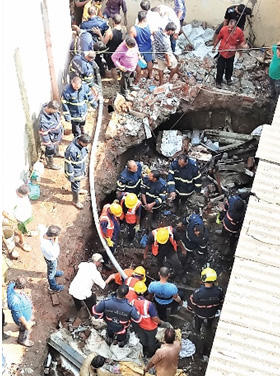 In a tragic incident, a woman and a man lost their lives when the public toilet at Sai Sadan Chawl in Bhandup (West) caved in!
The mishap occurred on Saturday early morning at 6.30 a.m. when most people attend to Nature’s call. LabhubenJethwa (42) and BabulalDewase (45) were the two unfortunate souls who became victims of the decade-old dilapidated toilet.

It may be noted that around 2000 people reside at Sai Sadan Chawl in Bhandup (West). Some 30 years ago, a 20-seat public toilet block was constructed in the area. Residents bemoaned that the toilet was never repaired in these 10 years despite several complaints by the locals.Though most people in the area have toilets in their houses, this toilet was being used by about 150 underprivileged people.
According to residents, on April 30 (Saturday) morning, the toilet collapsed with a loud bang. Immediately, the Fire Brigade reached the spot,but there was so much debris that it was a daunting task for the firemen to trace the victims buried underneath. Nevertheless, after 6 hours of hard labour and with the assistance of National Disaster Response Force (NDRF) and sniffer dogs and officials from the Sewerage and Drainage Department, the fire bridge succeeded in tracing BabulalDewase and LabhubenJethwa. BabulalDewase’ body was found dead in a sitting position,while Labhuben was found buried under tons of debris. She, too, had died.
Regrettably, with the collapse of the public toilet, the 150 poor and needy people who used the toilet are in a dilemma. They are wondering where they will go to relieve themselves.
People complain that the toilet was not maintained properly. The toilet was never repaired, and the septic tank was in a pathetic state. Had the septic tank been repaired in time and the maintenance of toilet done sincerely,the toilet would not have collapsed, and two innocent lives would not have been lost!!!
The police have closed the case as an accident!

BOX
After toilet collapse in Bhandup; BMC Awakens
Like always, after the dilapidated toilet collapsed in Bhandup, BMC has awakened from its deep slumber. BMC has announced that from now onwards all the public toilets in the city and slums will be inspected to avoid such mishaps in future.
Mumbai Mayor,Vishwanath Mahadeshwar, visited the spot of the incident and even met the relatives of the deceased. He also instructed the BMC officials to immediately re-construct a better quality toilet at the earliest to avoid inconvenience to the public affected due to the toilet collapse mishap.
It may be noted that BMC has already inspected many toilets in Mumbai and has identified 11,170  toilets in a state of disrepair. BMC plans to demolish these toilets soon and construct 15,774 new toilets in their place.
These new toilets would be modern and offer better amenities to the citizens.