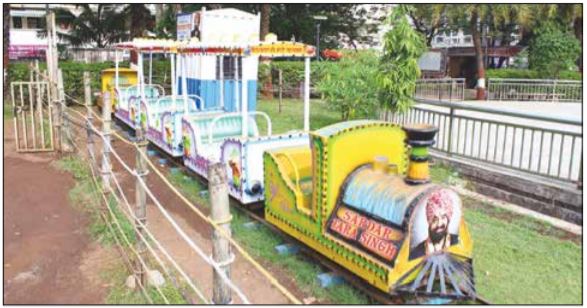 The toy train which was one of the major attractions and a source of entertainment at Sardar Pratap Singh Garden for both, children and adults, has been reportedly shut down. According to reports, the financial crunch is the major reason behind the train being discontinued. Sources claim both, the BMC and the contractor who managed the operation of the train, have alleged that the maintenance cost of the train has become too massive to bear.

It may be noted that Sardar Pratap Singh Garden located near Cypress Towers in Mulund West has been among the best rated public gardens in the suburbs. People who throng the garden regularly inform the highlight of the garden has been its toy train which was quite popular among the kids. The train would be operated in the evening and both the kids and their parents had a ball. But, tragically, BMC T-Ward has discontinued the financial aid, hence the train has been stopped.

However, BMC officials assert they have shut the train as the operators functioning the train were illegally charging Rs. 10/- per kid.

A BMC official told Home Times, “It is not true that BMC has discontinued the toy train due to any financial crisis, but we have shut the train after we received complaints from parents about the operators of the train charging Rs 10/- per kid for a ride.” He informed, “BMC had started the toy train from the MLA funds and the ride on the toy train was absolutely free for the kids. We have stopped the train to curb the illegal business being conducted at the garden.”

When Home Times confronted the operators of the toy train, an employee running the toy train said, “We charged the kids as a few notorious elements would damage the toy train. Hence, as it became difficult to arrange for the maintenance cost of the train, we took a nominal Rs 10. per kid. However, after BMC warned us against taking charges from the public we had stopped taking any fee.”

A disappointed parent told Home Times, “The children are most upset by the shutting down of the toy train. The BMC must start the toy train at the earliest. If the BMC needs some funds for the maintenance of the train, the parents are ready to pay for the ticket, but we urge BMC to re-start the toy train.”