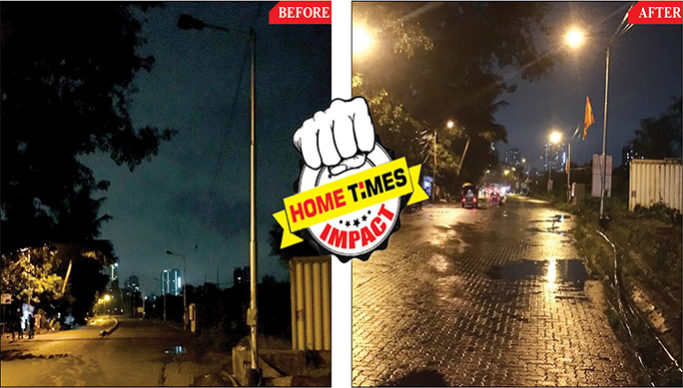 Home Times, like a crusader of Mulund, has been working round-the-clock highlighting the woes of Mulundkars and the crumbling infrastructure in Mulund. For months, Home Times has been highlighting the problem of non-functional street lights in Mulund/ Bhandup. In one of its past issues, Home Times had highlighted about street lights lying defunct for the past three months. Thankfully, after Home Times published the news, the MSEDCL administration awoke from their slumber and has rectified the problem. The darkness of the road has vanished and the street lights are glittering again.

It may be noted that we had, in our issue dated 28 Aug 2019, carried the story, “Veer Savarkar Road In Darkness Since Past 3 Months!” In this story, we had mentioned the ordeals of the residents living on the stretch from Nahur to Bhandup’s Hema Park located on Veer Savarkar Marg and to the people living on the road opposite V.K.Krishna Menon College in Bhandup. The street lights on these lanes were either switched-off or lying defunct. Due to the blackout, motorists and residents faced a nightmare for the past three months!!!  The residents had complained with MSEDCL several times but in vain.

What is most terrifying is that the road to Menon College passes near a nullah. Taking advantage of the darkness many anti-socials and drug addicts looted passers-by. A few months, back a dead body was found in the nullah, hence people commuting on the road at night was scared and urged MSEDCL to start the street lights but the lazy MSEDCL officials paid no heed to the public’s woes. However, after Home Times published the story, the administration took the issue seriously and repaired the street lights within one week!!!

The residents have expressed their gratitude to Home Times for solving the issue and giving them relief from a major problem. A resident said, “We are obliged to Home Times for coming to our rescue. Since three months we were running from pillar to post to get the street lights functional but, thankfully, Home Times solved the issue in one week!”