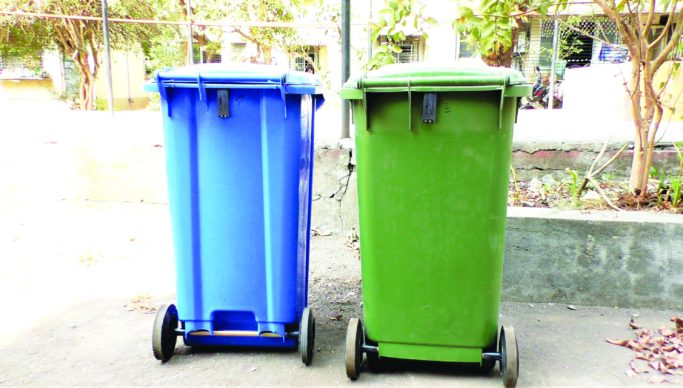 BMC T-Ward has intensified its war against garbage to make Mulund Swachh as part of Swachh Survekshan, 2019. In order to give a boost to segregation of wet and dry waste, BMC T-Ward has decided to provide separate bins to residents living in Mulund and its suburbs. According to reports, BMC has decided to give priority to segregation of waste and recycle the waste into productive use. Funds in crores have been sanctioned by the government to make this mission a success.

Hence, to accelerate its waste segregation drive, BMC T-Ward has distributed dustbins door-to-door in housing societies to encourage residents to segregate wet and dry waste. Each resident has been given two dustbins and asked to put wet garbage in the green bin and dry waste in the blue bin. The objective of the waste segregation drive is to reduce the burden on the dumping ground. Hence, T-Ward has roped in even small housing societies so that BMC collects segregated waste which can be recycled.

In addition to segregation dustbins, BMC has also placed huge containers outside every housing society in Mulund. These free containers are in two distinct colours – green for dumping wet waste and blue for dumping dry waste. Residents are requested to dump the garbage in the respective bins.

Interestingly, the dustbins are high-tech. They are fitted with sensors. When the bin gets filled up, it will automatically send a signal to the civic body office. In case, garbage is not lifted from outside the society, the BMC office would automatically be alerted. Thus, the new dustbins will ensure daily clearance of waste outside every housing society.