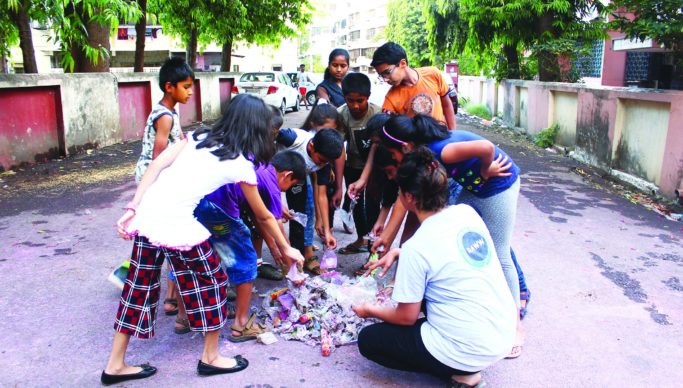 On the one hand, when several Mulundkar made mockery of the plastic ban and used water-balloons filled with gulal in the prohibited plastic bags, caring little about their harm on our eco system, an NGO, RAWW (Resqink Association for Wildlife Welfare) took the responsibility of collecting the plastic bags from Mulund’s roads and prevented them from blocking Mulund’s drains.

Informing Home Times about their noble task, Drishti Danani, a RAWW Committee official said, “Before the start of the Holi festival, we had conducted an educational campaign, particularly on our social network, as the youth of the country is more active in it. However, despite our campaign asking citizens not to ‘Waste Priceless Water’ and ‘Not to use Plastic Bags’, the people ignored it. Hence, the next day, we came on the roads and with the help of our children and our NGO members we collected as many plastic bags that we spotted.”  She added, “We are not against the Holi festival, but our protest is against the reckless and irresponsible Holi enthusiasts who harm the environment by throwing prohibited plastic bags and waste water when our farmers are dying due to acute drought in the villages of the country!”

The members of this NGO and their children team collected plastic bags from every nook and corner of Mulund and also created awareness about the hazards of plastic. The NGO also uploaded pictures of this year’s Holi depicting some weird and bizarre Holi scenes and also presented the harmful consequences of such Holi. “This was done so that people watching would learn a lesson and avoid playing Holi in such a weird manner and stop wasting litres of valuable water and using plastic bags that degrade the environment,” asserted Drishti Danani.

She also informed, “The purpose of RAWW is to create awareness in society. During Holi, people go so hysterical in celebrating the festival, that they forget the pollution caused by plastic bags or the loss of precious water. In fact, during Holi, people go so crazy that, under the influence of masti,several people are injured. Not just human beings even mute animals and birds become victims of these Holi revellers. RAWW focuses on such important issues and tries to bring a change in society.”