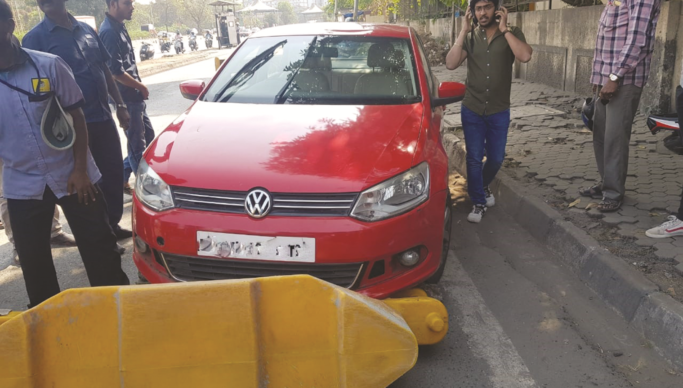 The presence of mind and quick action by the employees at Anandnagar Toll Naka in Mulund East averted a major accident as they succeeded in forcibly stopping a lady driving her car at an amazingly high speed!!

The lady who was in a hurry, first collided with 2 vehicles near Navghar junction and, later, rammed into three more cars coming from the opposite direction. She had lost control of her car and her vehicle had veered off. Fortunately, the Toll Naka employees stopped her! Had the car not been stopped in time, it would have created havoc!!

According to reports, a 34-year-old lady was on her way to Ghodbunder. She was driving her car so swiftly that she first collided with two motorbikes at Navghar junction on the Eastern Express Highway. However, instead of on stopping, she sped away and further banged into three more vehicles coming from the opposite direction!! Eyewitnesses who watched the accident, immediately chased her vehicle and successfully stopped her vehicle at the Anandnagar Toll Nagar with the help of the vigilant Toll Naka employees.

But, instead of regretting and admitting her crime, the obnoxious lady started indulging in arguments. The Navghar Police taught her a tough lesson and booked her for rash driving.

The lady has also been tested for driving under the influence of alcohol. Meanwhile, the court has released the lady on bail! Fortunately, in the collisions, nobody was injured.