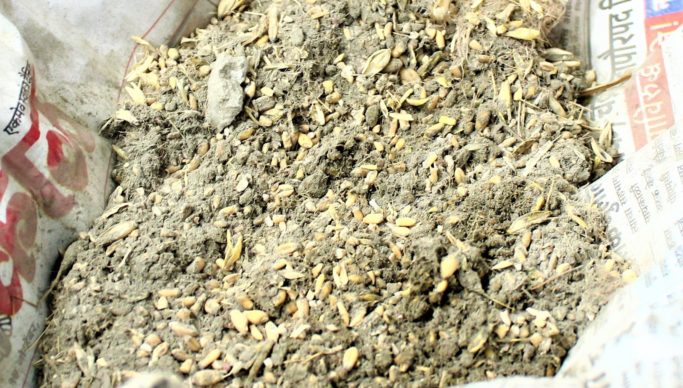 The Government of India through PDS (Public Distribution System) shops, popularly known as Ration Shops, supply food grains and other edible commodities at a highly subsidized rate. Generally, the poor and the underprivileged make their ends meet purchasing these subsidized materials. However, it is a tragedy that corrupt ration shop owners dupe these poor people by selling them adulterated and inferior quality commodities. They further cheat them by manipulating the weighing machines and charging higher prices!!

Recently, a case of cheating has been registered against a ration shop owner for selling adulterated wheat to a lady consumer. The ration shop is located at Siddharth Nagar CHS, 35 E (51 Kendra), Tambe Nagar in Mulund West. Kiran Gaikwad, the lady who has levelled corruption charges against the shop owner, told Home Times, “After I took my ration home, I was left shattered to find the wheat adulterated with muddy coloured pebbles and lumps of cement concrete. After cleaning the wheat I was aghast to discover more than 1 kg of muddy pebbles and concrete in ration! I was annoyed and complained to the shop owner,  but he shooed me away citing he has given whatever the government supplies!”

Fuming with rage over the ration shop owner’s reckless reply, the lady approached Sunil Gare, a local social activist. Soon, Gare with a group of ladies met H. Sayed, the Assistant Rationing Officer at Mulund Rationing Office and narrated the ordeal. Sensing the gravity of the situation, Mr. Sayed immediately raided the alleged ration shop at Tambe Nagar and collected samples for investigation. “I have collected the samples from the ration shop. After examination, we would surely take action against the accused,” Mr. Sayed told Home Times.

Attacking the corruption at the ration shops, Kiran Gaikwad lambasted, “The government has established ration shops for the welfare of the needy and the deprived. It is an irony that instead of poor benefitting from these ration shops, the corrupt ration shop owners are minting lakhs of rupees by indulging in fraud and malpractices. These shop owners are thriving as they are hand-in-glove with the administrative officials who, in turn, shield them from any action. Thus, the poor suffer while the ugly trend of corruption has bee continuing since ages.”