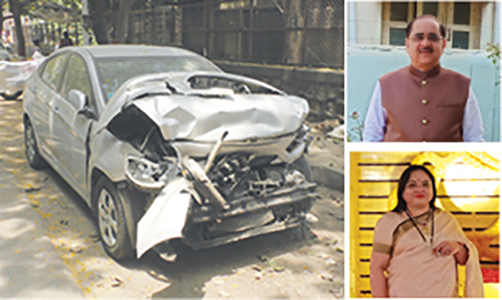 Mulund: The ‘killer’ Eastern Express Highway (EEH) continues to claim victims! This week, two accidents have been reported. In the first accident, a youth lost his life, while in the second accident a driver under the influence of alcohol rammed into 7 vehicles bringing the entire traffic to a halt!!

According to reports, Lakhan Mishra (25) and his friend Praful Doghade (29) were returning from Powai. At about 10 pm, it started to drizzle and, due to the slippery road, Praful who was riding, lost control and his bike skidded. As a result, both Praful and Lakhan fell off the bike. However, Lakhan who was riding pillion sustained serious injuries to his head and died on the spot while Praful sustained minor injuries. The accident took place soon after the duo had crossed the Anand Nagar Toll Naka on EEH.

In the second accident, Navghar Police have arrested Nitin Gulve (58) who was driving under the influence of alcohol and rammed his speeding car into seven vehicles. Nitin’s wife, Anjali, who was accompanying him in the car was seriously injured and rushed to Jupiter Hospital at Thane. She received grave injuries to her head.

Navghar Police informed that Nitin, a resident of Kapurbawdi, was returning to his house after meeting his mother at Bandra. Nitin lost control of his car (MH 04 GI 7603) the moment it descended the Navghar flyover and rammed into seven vehicles that were ahead of him. The accident brought the traffic at a halt. The seven vehicles sustained much damage. The police have booked Nitin under IPC sections 279, 337 and the Motor Vehicles Act 158.  Nitin was arrested, but released on bail.