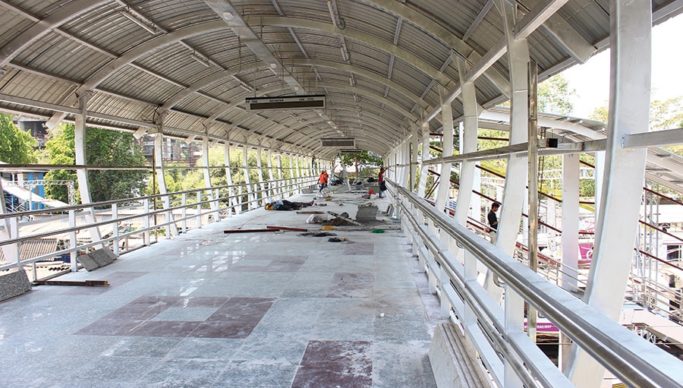 Facilities like Elevators and Escalators yet to be installed

Looking at the growing amount of commuters and the mammoth crowd at Mulund Railway station, the railway administration had started construction of an additional FOB (Foot Over Bridge) last year. The FOB is almost 90% ready and shall soon be opened for public. However, passengers would have to wait for facilities like elevators and escalators, which are yet to be installed.

It may be noted that the railway administration turned serious about FOBs after the terrifying accident of Elphinstone Bridge in 2017. Soon after the accident that killed many and injured innumerable commuters, the railway minister ordered an audit of all the FOBs in Mumbai and passed orders to construct new FOBs at railway stations that had dilapidated FOBs, to avoid accidents.

It was during the same phase when the Mumbai Railway Vikas Corporation (MRVC) started the work of a new FOB in Mulund. However, in March 2019, the horrifying collapse of CST Himalaya Bridge near the Times Of India building raised questions on the incompetent audit reports of the FOBs conducted in 2017!

In Mulund, too, commuters and the media raised questions about the plight of the dilapidated FOB at Mulund railway station. The FOB connecting Mulund West and East is not only 40 years old, but has been in the news for its dilapidated condition. In fact, once a portion of the bride had even collapsed, similar to the collapse at CST FOB. Hence, the railway authorities got frightened and, before any tragedy could strike, they started the new FOB work on a war footing.

The highlight of the new FOB is that it will start from the parking space in Mulund West and connect platforms number 1, 2, 3 and 4 and will exit at Mulund East. The other significant feature of this FOB is that it is wider than the old FOB. This will enable commuters to walk freely, without crowding. Thus, commuters will have a safe and smooth travel on the new FOB. Passengers are anticipating for the railways to be stringent against hawkers and keep the new FOB free of the hawkers’ menace.

In addition to the new FOB, railway administration plans to provide 7 news escalators and 2 elevators (lifts) for the easy and smooth movement of passengers. The reason behind Mulund getting such high-quality facilities is that Mulund is counted amongst the top suburban trains stations on the Central Railway. It has a whopping footfall of 1.5 lakh commuters per day. Hence, the Railways is giving Mulund a new and modern face-lift. Mulundkars are thus delighted and excited to witness the opening of the new FOB at the earliest.