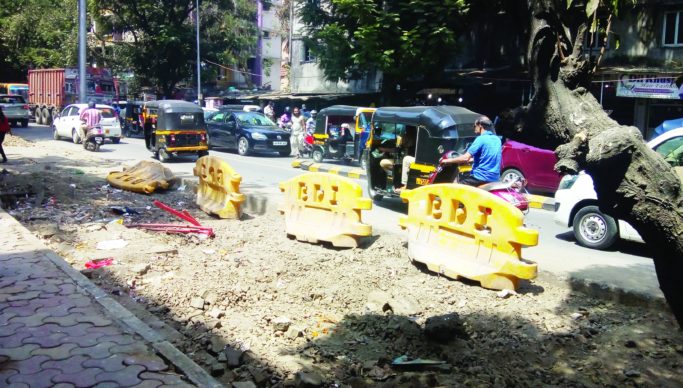 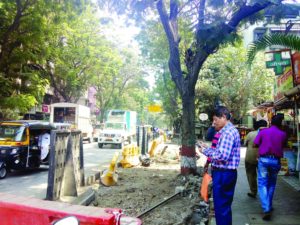 Last week, Home Times had highlighted how both, the commuters and citizens of Mulund West, are facing immense problems on Mulund’s much congested LBS Marg due to the reckless work of the Metro and BMC T-Ward. Like Mulund West, the condition of traffic is badly affected at Navghar Road in Mulund East due to snail’s speed work of BMC T-Ward. Annoyed Mulund East residents lamented to Home Times that since the past 15 days BMC T-Ward is doing the road work but, regrettably, still the work is incomplete thereby causing immense hardships to motorists.

An agitated motorist said, “The BMC authorities have no empathy for the citizens’ woes. During the peak hour rush in the evening, Navghar Road becomes so jam-packed that many times the bikers are at the risk of accidents. The traffic is so slow that it takes about 20 to 25 minutes for motorists to cover a short distance from the Eastern Express Highway to the 90-Feet Road.”

A frustrated biker told Home Times, “The road work was started on March 1, but it is almost 2 weeks and still the road work is lying unfinished.” He added, “On the one side, the road is dug while on the other side road work is going on. Hence, the road is so hazardous that commuting over it is dangerous, particularly for bikers. Last week, I fell off my bike and was injured. Like me, many bikers’ lives are at risk when they travel on this bumpy road. Hence, I have urged the civic body to complete the work at the earliest.”

Prakash Panse, a Mulund East resident told Home Times, “In Mulund, one can find the road work consistently going on throughout the year. The problem is that BMC is not sincere in its work. At many places, they start work and then leave it incomplete and start work on another road. Due to this mismanagement, the commuters are adversely affected and the problem of traffic jam continues.”