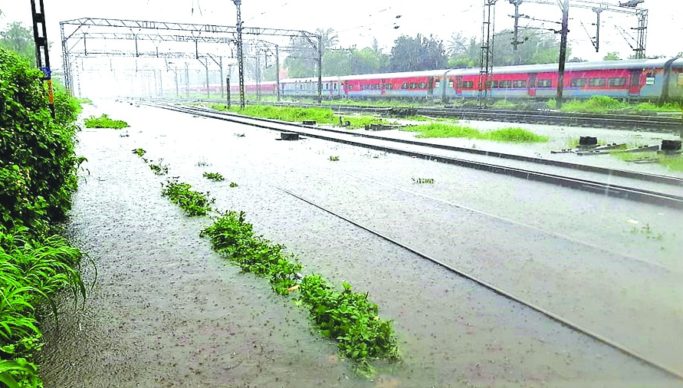 Mulund: After the devastating 26/7 deluge of 2005, Mumbaikars shall never forget the gruesome monsoon of 2019 because, for the first time, Mumbai has been reeling under the torrential rain on three different occasions during this monsoon season. First, Mumbai went under water from June  28 to July 2; then on August 9 till 12 Mumbaikars witnessed similar havoc and now on Tuesday, September 5 and Wednesday 6, 2019 Mumbai witnessed a replica of the 26/7 deluge!

According to BMC, Mumbai witnessed 550 mm of rainfall in 48 hours which was too much to handle. It may be noted, on 26th July 2005, Mumbai had recorded the heaviest ever 24-hour rainfall figure of 944 mm which had stranded Mumbaikars in their offices and places of work. Many had spent a sleepless night on railway platforms, bus depots and other public shelters.

A similar picture was observed on Tuesday. The torrential rain that had started in the morning became so intense by noon that local train services on all the three routes were cancelled. The services did not resume even by night, hence many people were stuck and spent the night at their respective offices. Many unfortunate people had to spend the night at railway platforms. In Mulund and Bhandup, too, due to water-logging at several places people were seen spending the night in a chilly and heavy downpour on railway platforms.

What annoyed Mumbaikars the worst was that the monsoon fury had spoilt the enthusiasm and devotion of the Ganesh festival. Ganesh devotees were angry as many Ganesh pandals across the city were submerged in water, thus dampening the spirit of Maharashtra’s famous Ganesh Chaturthi festival. The customary rush at Sarvajanik Ganpati Mandals was absent as many devotes stayed back at home while several Ganesh pandals witnessed water-logging.

With Mumbai’s Lifeline -the local trains- being cancelled, many devotees who visit relatives residents for Ganesh Darshan were much disappointed. An angry devotee said, “Lord Ganesha arrives once a year. We visit my uncle’s house at Dadar, annually. He keeps Ganesha for one and a half days. But this year due to heavy rains we could not visit his house. It was quite hurting.” Thus, the Mumbai rains ruined the excitement and the usual enthusiasm of the one-and-half-day Ganesh Visarjan due to lack of devotees as most preferred to sit at home than dance and participate in the Visarjan.

Both Mulund and Bhandup received heavy rains. The famous LBS Marg in Mulund was knee-deep in water. Water-logging was witnessed at many places on LBS Marg. What was most agonizing for pedestrians and the motorists were the ‘invisible’ potholes under the water at LBS Marg. Besides, due to the Metro work and water-logging, only one lane was in operation for the motorists. Hence, the traffic jam was so menacing that motorists had a tough time reaching home as they had to wait long hours since the traffic moved at a snail’s speed.