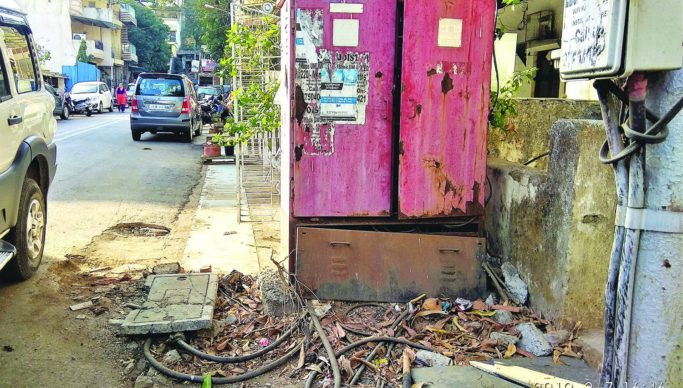 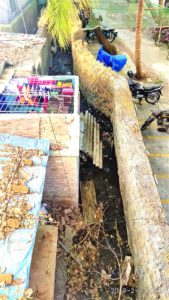 A bunch of residents of Agra Road like Trilok Singh, Rajesh Thakker, Geeta Jawani, Deepa Belani, Sonia Mani and Shailaja Thakkar met us and poured forth their problems. Deepa Belani, a resident living close to Astha Hospital told, “We have been facing multiple problems for years due to the negligence of MSEDCL and BMC. But, alas, the concerned authorities are not paying heed, and this has made our lives miserable.”

She said, “An electric DP box has been lying open since past many years. The live wires popping out of the box are a major threat to the pedestrians and may cause an accident.” She added, “We made many complaints in 2013 to MSEDCL, but even after 6 years the authorities have not paid any heed. Hence, frustrated, we decided to move out and reside at a different place for our security.”

Similarly, due to BMC negligence, the residents are facing many problems. Shailaja Thakkar told Home Times, “The outlet path of the gutter behind their houses has been choked since the past 4 years. Hence, dirty water enters their houses and creates a major problem for the residents. She moaned, “The problem is major during the monsoon. As a result of the dirty water, our children are under constant threat of malaria and dengue. Besides, the foul smell emitting continuously is sickening.”

Residents claim their area is infested with many such problems but, tragically, the civic authorities are not coming to their aid. Some people have even spent thousands of rupees from their own pockets to get their area’s basic problems solved. Another resident informed that BMC had repaired a water pipeline in their area, but the work done was of so poor quality that still there is water leakage and water accumulates in their premises.

Home Times hopes that both the bodies i.e. MSEDCL and BMC will take notice of the complaints of the residents living on Agra Road in Mulund West and solve their problems at the earliest.

On the other hand, MSEB official, Mr.Gulani has conveyed that he has send the complaint to the in-charge of that area to inspect and set right the problem.